“This relation is not just built on the mutual confidence that friends must possess, but is also built on the strong foundation of shared values. We all believe in democracy, we believe in pluralism, in humanism, and we believe that the true objective of any nation is to create prosperity for our people,” Mr Akbar said during a joint press conference on Thursday, adding that peace was an essential condition for people to prosper, hence the two nations’ cooperation in areas of peacekeeping and fight against terrorism was of utter importance.

Mr Linkevičius, the Lithuanian Foreign Minister, noted that his country and the world’s second most populous nation enjoyed close economic and cultural ties that were much older than the quarter-of-a-century-old diplomatic relations. 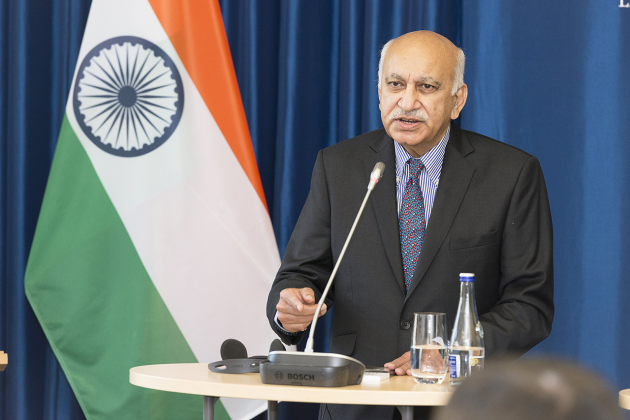 Lithuania and India have important things to learn from one another in areas like IT, life sciences, lazer technology, chemical and textile industries. Mr. Akbar emphasised that Lithuania’s hospitals could benefit greatly from India’s medical facility industry which could produce quality equipment for one tenth of the cost compared to Western producers.

Both ministers welcomed the fact that Indian students were rdiscovering Lithuania as an academic destinations. Some 800 Indian students currently study at Lithuanian universities, according to Mr. Linkevičius, who noted that this was an important investment into the future. The Indian minister added that his country, too, boasted quality education institutions and graduates who occuppied top positions in many of the Silicon Valley’s companies. 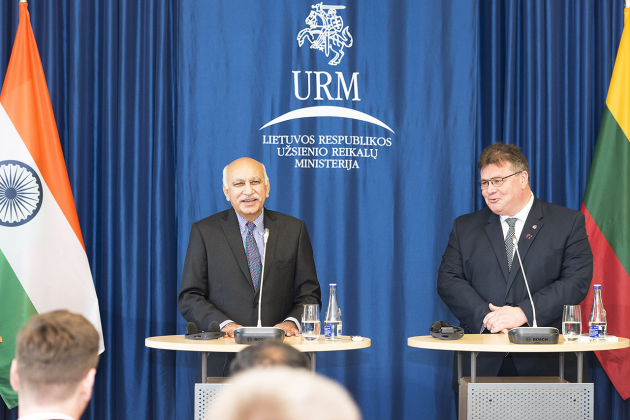 Lithuania opened an embassy in Delhi in 2008, whereas Vilnius only hosts a honorary consulate of India. That, however, can change very soon. Minister Akbar said that his government was seriously considering to open an embassy in Lithuania. However, the timeline for that is too early to speculate on, he added.

“What has been achieved is nothing compared to what will be achieved”, – Mr Akbaras summarized his vision for the future of the Lithuanian-Indian ties. 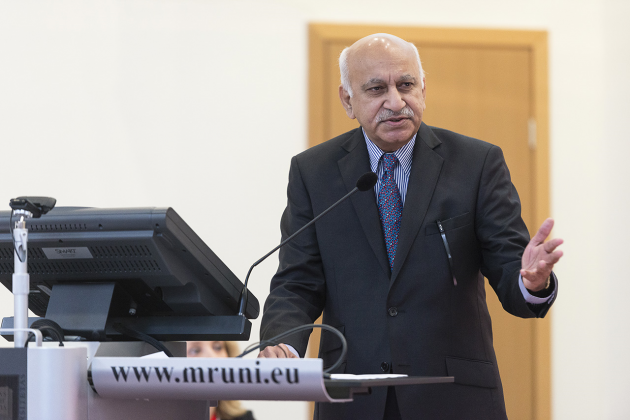 “There is one significant thing in common between our two nations. Both nations are optimist about their economic future. Both nations have people who are dteremined to move ahead and cate prosperity for their people,” Mr Akbaras said. “This is a spirit which is not found everywhere.” The visit will continue with meetings scheduled with several Lithuanian Ministers and a visit to Vilnius University.

Should Lithuania choose between Palestine and Israel?

We should not sit on two chairs, we must clearly choose our partners – Israel and the USA, conservative MP Žygimantas Pavilionis stated upon the Foreign Ministry declaring that it could consider the opening of […]

Representatives of two Lithuanian opposition parties – the Homeland Union – Lithuanian Christian Democrats and the Liberal Movement – are calling for the adoption of amendments that would create legal provisions to freeze assets of Russian oligarchs blacklisted by the Baltic state and restrict their economic and financial activities in the country. […]

Laurinkus. After Borrell’s visit to Russia – conspiracy theory about the game of thro...

LATO invites to lecture “EU Strategic Compass: Will It Lead to Strategic Autonomy?”

Juknevičienė: we must support nations seeking democracy and freedom

Seimas approved the priorities for international co-operation of the Seimas

Seimas to promote close bilateral cooperation between Lithuania and the US

Polish and Lithuanian relations at a crossroads: both positive and negative aspects of the new go...

Why Lithuania should not ratify the EU-Cuba cooperation agreement?

Kojala about forgotten attention for Ukraine’s situation: this should concern us

It is worth knowing better the country we view as threatening

Whom the Polish party in Lithuania actually represent?

Laurinkus. Relations with a weird Belarus: what plan to prepare?

Edward Lucas: Lithuania can do a better job as Lithuania

Some 71 per cent of Lithuanians want a business, but Covid-19 has caused doubts

Lithuanians are among the leaders in Europe in terms of the number of people who want to have a business as many as 71 per cent, AGER 2020 (Amway Global Entrepreneurship report) shows. However, the […]

No other path for the government: must show more than just the once promised plan

The face of Lithuanian populism: not radical but loud

“15min” and BNS companies merge with “Media bitės”: will aim to become the strongest media group in Lithuania

Kupšys: Government’s 100 days – we are seeing “green” ambition, but it could be better

If we put a magic wand in a child’s hand, he would most likely wish for a room full of toys. Many of us construct our happiness through the word “more”: more fashionable clothes, more […]

The working group on the review of tax benefits, set up by the Ministry of Finance, has already received over 200 proposals from experts, business and the public on what needs a transformation in the […]