India, the nation which began decolonialization, sees women’s equality as a crucial part of its modernity, Mr. Akbar noted, giving an overview of the programmes his country is pursuing to advance women’s empowerment. 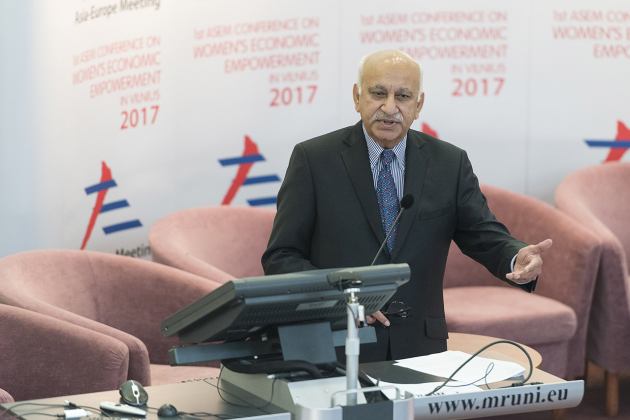 “You cannot be an empowered nation without gender equality,” he said, adding that legal and political rights mean little unless they are accompanied by women’s ability to support themselves economically.
The first ASEM conference “Women’s Economic Empowerment: Creating Equal Opportunities in the World of Work” is organized by the Lithuanian Ministry of Foreign Affairs, the Lithuanian Ministry of Social Affairs and Labour and the Mykolas Romeris University.

Addressing the participants of the conference, Mr. Akbar noted it was telling that the event was hosted by Lithuania, a country where “45% of the population are women and women live on average 10 years longer than men”.

“And why am I not surprised at this fact? Women are simply more sensible and they probably also drink less vodka,” the Indian minister joked. 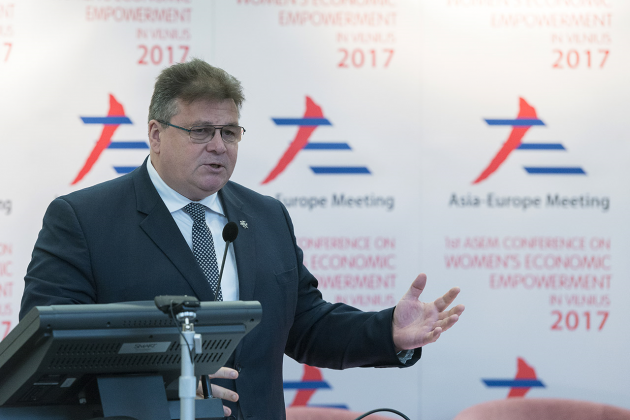 The conference was also greeted by its patron President Dalia Grybauskaitė of Lithuania, who gave a televised address, the country’s Foreign Minister Linas Linkevičius, Minister of Social Security and Labour Linas Kukuraitis.

Lithuanian laser companies are exporting over 90% of their production overseas, with India and China developing as key export markets. […]

Lithuania has opened two new honorary consulates in India and Finland this week, the Ministry of Foreign Affairs said on Wednesday. […]

Lithuanian entrepreneur set on opening up the Baltics to Indian tourists

The things that fascinate them most in Lithuania are: water that you can drink directly from the tap, cleanliness, small population and insanely fast internet. They are also amazed by the clouds, since in India, the sky is either completely clear or overcast. […]

Why Lithuania should not ratify the EU-Cuba cooperation agreement?

Kojala about forgotten attention for Ukraine’s situation: this should concern us

It is worth knowing better the country we view as threatening

Whom the Polish party in Lithuania actually represent?

Laurinkus. Relations with a weird Belarus: what plan to prepare?

Edward Lucas: Lithuania can do a better job as Lithuania

Are we going to allow construction to begin on the second block of the Astravyets nuclear power p...

We know how to growl at Belarus, but not talk to it

Nausėda: The big neighbour is actively working and achieves the most where there is a shadow

Free Russian visa as a trap: warning regarding Kaliningrad

PACE: Russia was not confused for too long

Grybauskaitė‘s foreign policy: will Nausėda wade into the old river?

The cost of Western naivete

On prospects of Grybauskaitė international career and Poland

Due to the pandemic, a concert in Paris for the Lithuania Independence Restoration Day on 11 March 2020 was rescheduled to Lithuania’s National Day. On a beautiful summery day in June, vocalist Viktorija Gečytė, vibraphonist […]

When the Baltic and Polish Foreign Ministers met in Vilnius, they welcomed the success of the fight against the coronavirus. However, disagreements have arisen over their views toward the Astravyets nuclear power plant, Vilmantas Venckūnas […]

Astravyets on an electoral platter: why are the Conservatives so aggressive and the “Farmers” so silent?

The approaching Seimas elections and launch date of the Astravyets Nuclear Power Plant have linked these seemingly unrelated events. The opposition Conservatives are ever more fiercely critical of the ruling parties and the president for being unable […]

The post-financial crisis period of 2010-2019 proved that the Baltic economies are able to cope and recover from large economic downturns successfully. During this period, the Baltics have seen growth in private capital manager’s activity, […]