More than 300 Lithuanian-American sites have now been marked on an interactive online map, the first of such kind! It is accessible for free at http://map.truelithuania.com .

Lithuanian-American sites have astonished even the map team

The ambassador of Lithuania in the US Rolandas Kriščiūnas said that this interactive map is just what was needed for all Lithuanians – not only those who live in the US, but also the ones who travel to the US from any other country. “As I live here in the US, I can see the footprint Lithuanians left here is just impressive – this can easily be seen by the amount of Lithuanian heritage. I strongly believe this interactive map will help everybody find out more about these places and get a full impression of them,” he said. 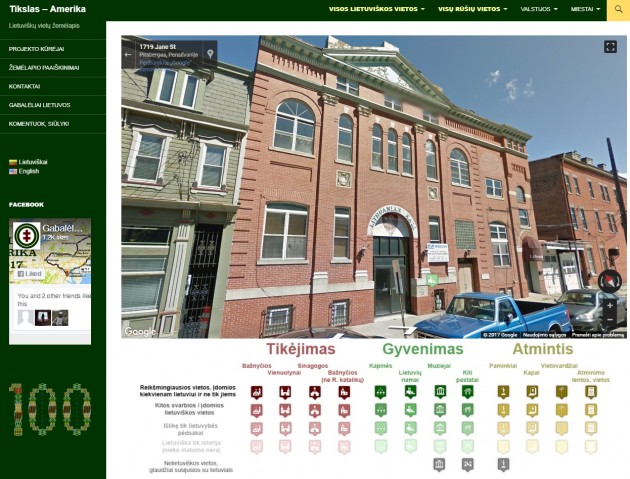 The head of the “Destination – America” project Augustinas Žemaitis said that even the people who provided the stories of Lithuanian heritage for the “Destination – America” project often said they hope the map will be useful to them as well. “Although most of them know about the places in the cities they live, many have been pleasantly surprised to learn of such locations like a Lithuanian-named lake in the suburbs or even a Lithuanian coat of arms that is engraved on a downtown facade. To tell the truth, even though I have already been researching Lithuanian heritage for 5 years now, I was sometimes surprised by the magnitude of the Lithuanian places in America. We also “discovered” new sites that just never had been written about in accessible sources. At the beginning of the project, I hoped we could mark at least 100 sites, 150 at best. However, the reality appeared to be much more impressive and now our interactive map consists of more than 300 sites”, Augustinas Žemaitis said.

The “Destination – America” map is not merely a list of places. By clicking on the markers you may also get the site descriptions and images. Under each image, a link appears to a longer story of the Lithuanian locations in the area, with much additional information, history and images.

In addition to regular zooming, the map offers capabilities to select sub-maps by the state or the city, filter the sites by category and importance level, see the street views and more.

Lithuanian sites in “Destination – America” are grouped in four tiers. The higher the tier, the more important, interesting, visitor-accessible, and authentic the place is. There are 16 Lithuanian-related sites in the top tier, 105 in the second tier and 191 in the lower tiers.

The top tier sites should garner interest well beyond Lithuanians and includes major museums, and impressive monuments. The second tier sites provide a great Lithuanian atmosphere and are also interesting as sights. In the lower tier sites, only traces of Lithuanity remain, yet the sheer abundance of them is also a great testament to the importance of Lithuanians in America.

Moreover, the Lithuanian sites are arranged into categories by their use (churches, cemeteries, graves of famous Lithuanians, clubs, Lithuanian place names…).

The interactive free map of the Lithuanian heritage in the USA is accessible here:

If not me, then who? Cleveland’s Lithuanians Plant 100 Birch Trees for Lithuania

Lithuanian PM to meet with Lithuanian community in Poland

Asta and Linas who traversed the world on motorcycles have returned home: a record seems to be in...

Asta and Linas who traversed the world on motorcycles have returned home: a record seems to be in...

Italian Lithuanian A. Kriščiūnaitė-Dantoni: There is still a Soviet Union Street in Florence

A Lithuanian living in Alaska won the surname with “w”

In the context of this pandemic, we tend to hear more active calls by Western politicians for urgent transformation of the European Union, i.e. achieving deeper political integration, which would supposedly meet the dynamics in […]

President Gitanas Nausėda is increasingly often reproached for being too passive, and a “search for the president” is being announced ironically. Despite the fact that during the first presidential year, G. Nausėda spoke to the […]

Poll: due to uncertainty Lithuanians halt their plans to consume and borrow

A Spinter Tyrimai survey of Lithuanian residents performed in April on the current financial situation has revealed that within the coming three months, citizens are not planning any expenses. With the lockdown underway, the study […]

After imposing the quarantine, all countries, including Lithuania, witnessed drastic changes in data consumption habits. Most mobile network operators noticed people having more and longer calls, with up to 100% increase in voice services. The […]

Lithuanian startups were not intimidated by the crisis

The COVID-19 pandemic paralyzed a significant number of businesses, but startups make the most of this situation: Lithuanian start-up developers say that responding in a timely manner to customer orders is a major challenge for […]