The teams who had prepared two dishes, one of which was based on Chicken Tikka Masala, were put to the test with probing questions from the judges. Some interesting ingredients and cooking methods were discussed in between savouring the aromatic spices wafting through the warm air and the actual tasting.

The audience were not mere bystanders either. They were encouraged to sample all the various dishes and to vote for their favourite, which was won by the team representing the recruitment company, S3 International.

After over an hour of tasting, questioning and deliberating, during which guests could enjoy more culinary delights, offered by Sue’s Indian Raja, the judges made their decision. Unlike the Great British Bake off on BBC TV, there were no soggy bottoms on offer here, just questions about saltiness, flavouring and the texture of the curry!

Last year’s runners up, The Cricket Club of Lithuania lifted the first prize with the team from Barclays coming second. The third prize was won by the audience favourite, S3 International. 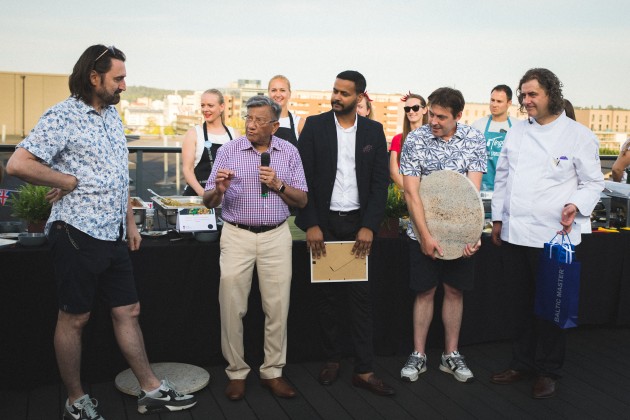 A great summer’s evening was had by all.

More photographs from the cook off and information about the BCCL including membership details are on the website www.bccl.lt

The climate change should not be blamed for the warm February 1 Saturday evening in Vilnius alone. Some blame to this mid-winter heat on that evening could be put on the famous Scots poet Robert […]

The British Chamber of Commerce has new Board and Chairperson

The British Chamber of Commerce in Lithuania has elected new board members who have been elected to serve a two-year term. As a result these individuals are proposed for a variety of strengths and experience […]

On 1–6 July, Šiauliai hosts the international folk contest-festival “The Flower of the Sun” for the seventh time; it brings joy, colours and diversity of events to city residents and guests. […]

Magic awaiting in Vilnius, the capital of Christmas

Discover the modern face of Vilnius

Documentary on the Chodakowski sisters releases in October

Job – A Simple Man: a Danish-Jewish musical drama based on the novel by Joseph Roth in Vilnius

One of the most well-known places in Vilnius has shut down: have a look what’s new and how it loo...

The Dutch musical touch to a Lithuanian State Day