‘In February, a record low activity in the apartment sector of the country’s capital and, for the first time after a longer period of time, a symbolic fall in sales prices were recorded. Despite slightly pessimistic moods prevailing early in the year in the housing market of the major cities of Lithuania, in the first six months of the year sales and prices shot up yet again. Of course, very different trends can be observed in different regions or cities of the country – from decreasing to rising indicators in the market activity and diverse price changes,’ Raimondas Reginis, Ober-Haus Research Manager for the Baltics, said. 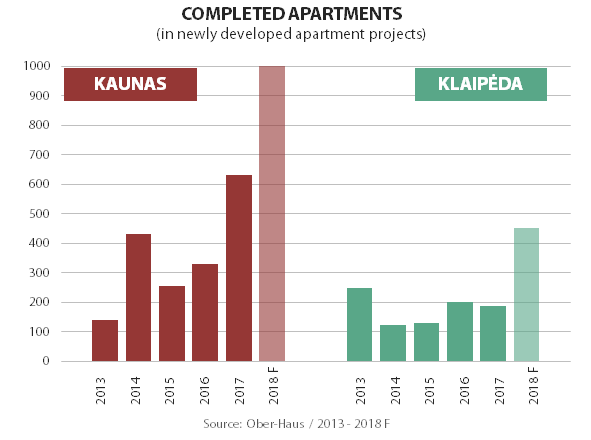 The Ober-Haus estimates reflect the transactions which are immediately officially registered (on the purchase of the property in a completed building) and the transactions based on the preliminary contracts, which will be registered with the State Enterprise Centre of Registers in the future, after the completion of the multi-apartment buildings. Meanwhile the State Enterprise Centre of Registers in its statistics for apartment purchase and sale transactions records only final transactions, which shows the opposite situation – the increasing number of transactions for new apartments reaching record heights in Q2 2018 when the acquisition of 1,268 new apartments was recorded in the city of Vilnius (best quarterly result since 2007). Based on the data of the State Enterprise Centre of Registers, the result of the first half of 2018 is also the best since 2007–2008. This shows that currently finalised and recorded transactions for new apartments were recorded and figured in the Ober-Haus estimates back in 2016–2017, i.e. at the time when the preliminary purchase and sale contracts for these apartments were concluded. Thus the housing market is currently absorbing almost a record amount of borrowed or own cash over the past decade. 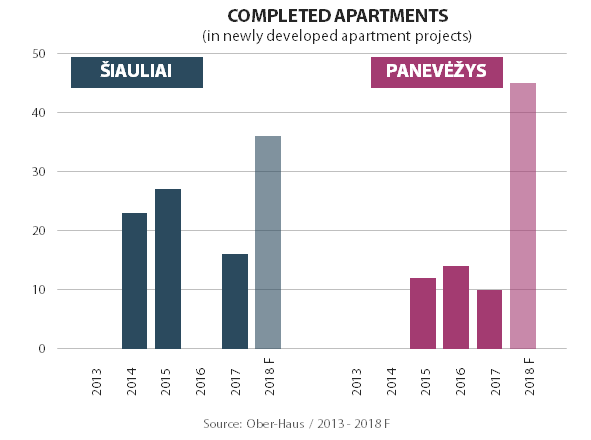 ‘Although this is a slight decrease in apartment prices, such trend has been recorded for the first time over the past three years. Last time the price decrease trend (for both new and old apartments) was recorded in Vilnius in the second half of 2014, when the then geopolitical situation had a negative impact on both the country’s business and people,’ Mr Reginis said. Current slight downward move in the price curve of newly constructed properties can be linked to a really significant and sufficient supply of new housing, which prevents a considerable portion of developers from increasing their sales prices as easily as they did before and they even have to compete for more attractive prices with other competitors.

Urbanavičius takes office as head of Lithuanian Center of Registers

Saulius Urbanavičius, a former head of Lithuania’s Special Investigation Service, has been appointed as director of the Center of Registers. […]

Lithuania will likely have only five companies with the status of a state enterprise in half a year’s time, including the Centre of Registers, the state car registration company Regitra, the State Forestry Enterprise, the Ignalina Nuclear Power Plant and an agricultural regulation company, Economy Minister Virginijus Sinkevičius said on Wednesday. […]

Indrė Makaraitytė. Covered by a noble mission – the majority’s lies and desire to control

Former companion of Ramūnas Karbauskis, from whom the head of the “Farmers” bought Ūkininko Patarėjas shares, Vytenis Neverdauskas says that one of the core facets of “Farmer” plans to take power was the LRT, Indrė […]

Bilotaitė urges not to relax: new migration trends are emerging

A press conference was held on Friday to discuss the challenges and the way forward. The Minister of the Interior Agnė Bilotaitė, the Commander of the State Border Guard Service, General Rustamas Liubajevas, and the […]