Most likely household consumption was the main driver of economic growth in the second quarter, supported by strong wage growth and very low inflation. Meanwhile, net exports seem to have contributed negatively. Preliminary data show that the value of goods’ and services’ exports in the second quarter was by 0.3% smaller than a year ago, while imports rose by 3.5%. In the second half of the year export growth will also be challenging, as Russian economy continues to weaken and Latvian exporters face food products’ embargo by Russia. The direct effect of the latter is expected to be rather small though – banned products comprise only 0.5% of total Latvian goods’ exports. Yet, competition among food producers in Europe will increase and it will thus be more difficult to find other markets, even provided that demand in Europe will increase. 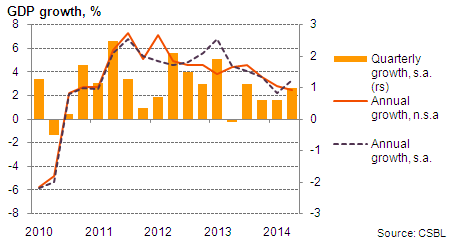 According to CSBL, construction grew by 16% in annual terms in the second quarter, retail trade by 4%, other services stayed flat, while industry still fell by 1% (since there was less heating and electricity produced due to warm winter without much snow). Given still strong construction growth, invesments most likely continued to grow in the second quarter, although imports of machinery and equipment were weak. 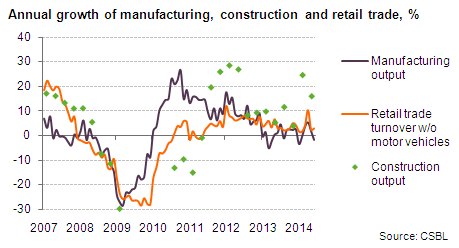 Economic growth this year most likely will be below 3% that we forecast in April. The main driver of growth will remain household consumption. Major risks to Latvian growth are still related to developments in Ukraine and Russia, and further possible sanctions to/from Russia.

Opinion: Lithuania’s interests in the Arctic – a new niche

Although most of our eyes are glued to what’s happening in Ukraine (and, let’s face it, the World Cup in Brazil) for reasons apparent to everyone, the world is not limited to what Lithuania sees. The latest and most important political trends determining power, identity, rules and regional development exist way beyond Lithuania’s geopolitical boundaries. […]

Latvia and Lithuania agree on joint gas purchases from US

On 16 October, the economy ministers of Latvia and Lithuania signed a memorandum of cooperation on the diversification of gas supplies, which foresees the two countries working together in speaking with potential gas suppliers, as well as joint purchases of gas. […]

The pandemic has closed borders and increased unemployment in Lithuania to levels not seen for several years. However, even give such a situation, a quarter more people immigrated to Lithuania compared to last year. The […]