Lithuania is probably one of the most well-hidden treasures of Europe at all times of the year. However, Vilnius during the month of December is filled with outstanding sightings and will strike even the most experienced travellers of the globe. Without a doubt, Lithuanians go all out with their Christmas decorations. As such, the streets of Vilnius display immense creativity, imagination and impressive artistic abilities.

The most famous attraction is Vilnius’ world-renown Christmas tree, often ranking among the most beautiful in the world every year. This year, even while the construction was a bit less grandiose due to Covid-19 restrictions and limitations, the 2021 tree still placed fifth in the Euronews rankings. 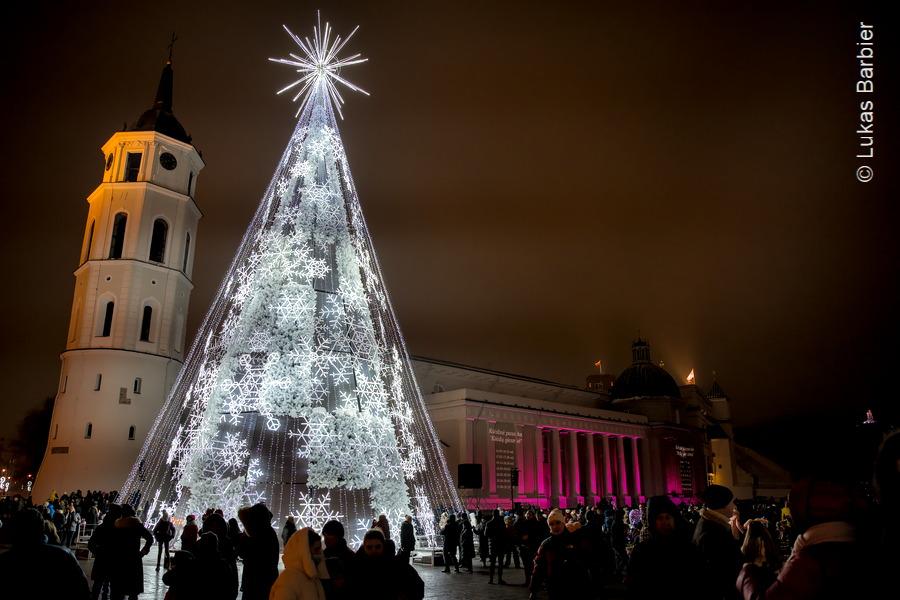 Yet, the yearly Christmas tree isn’t the only decoration in the Old Town of Vilnius: streets, store-fronts and cafés are filled with ornaments too! 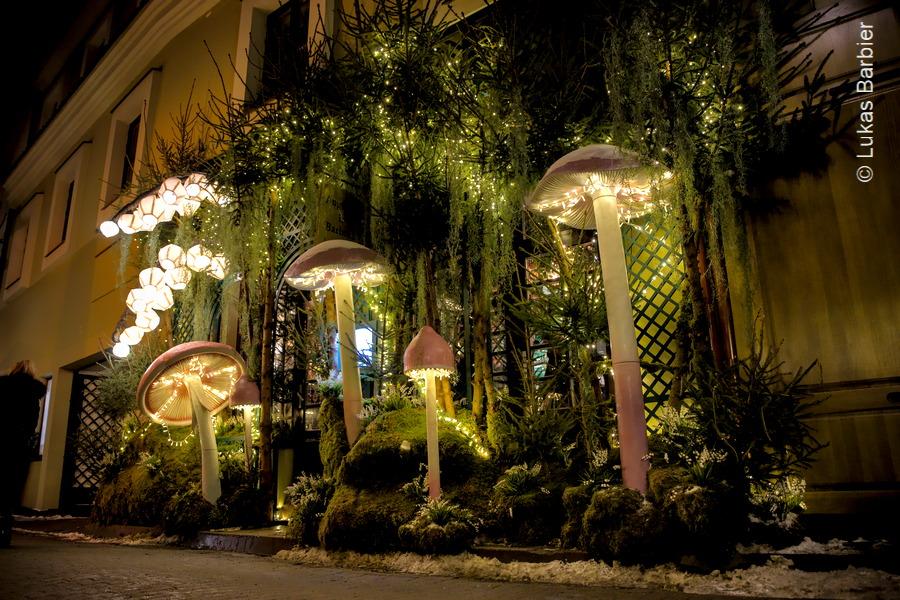 Seemingly taken straight from Alice in Wonderland, the display of the ‘Augustas & Barbora love story café’ is a very popular attraction with its giant mushrooms. The facade of the café in Stiklių street is overgrown with moss and fir trees which transport you straight into the fantastical world of Lewis Carroll.

The café-front was designed by stylist, decorator and show-host Mantas Petruškevičius after being contacted by the owners. 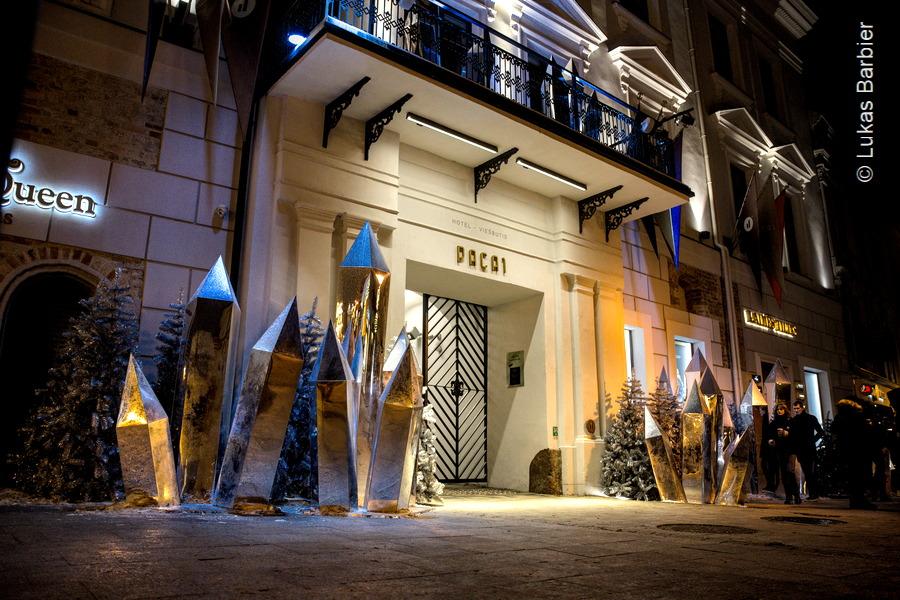 This year, owners went big, the ‘PACAI’ hotel wasn’t any different from ‘Augustas & Barbora love story café’. Also in collaboration with Mantas Petruškevičius, the entrance of the hotel welcomed giant sculptures of reflective ice spikes and fir trees. The hotel’s owners tried to achieve a more original look than going for a simple “natural” look with green festive trees. 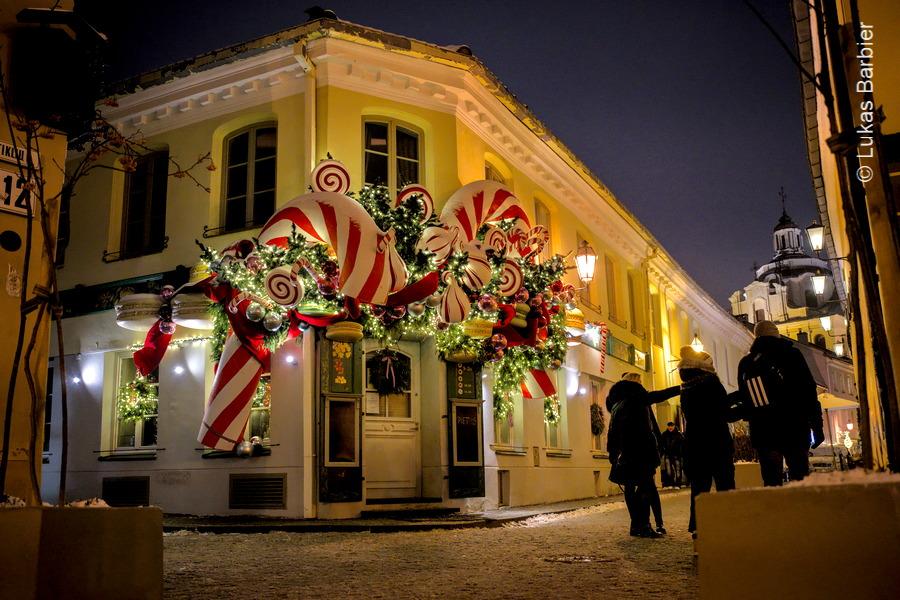 The bakery and café ‘Ponių Laimė’ (The Ladies’ Delight) opted for a design clearly inspired by traditional festive Christmas decorations, making it seem like an entrance to Santa’s workshop on Stiklių street.

However, the aroma-filled bakery is not decorated only for Christmas, but also the rest of the year with various themed designs.

Balzac restaurant: The Art of the Hand-crafted 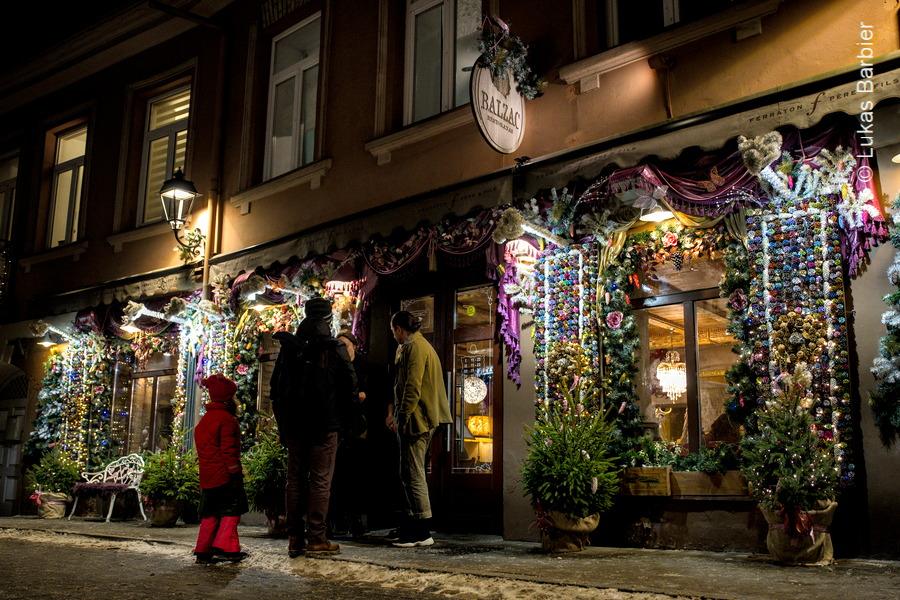 The classic French restaurant ‘Balzac’ on Savičiaus street was decorated with hand-painted conifer cones, giving it a colourful and homelike feeling. In essence, it pertains its French authenticity. 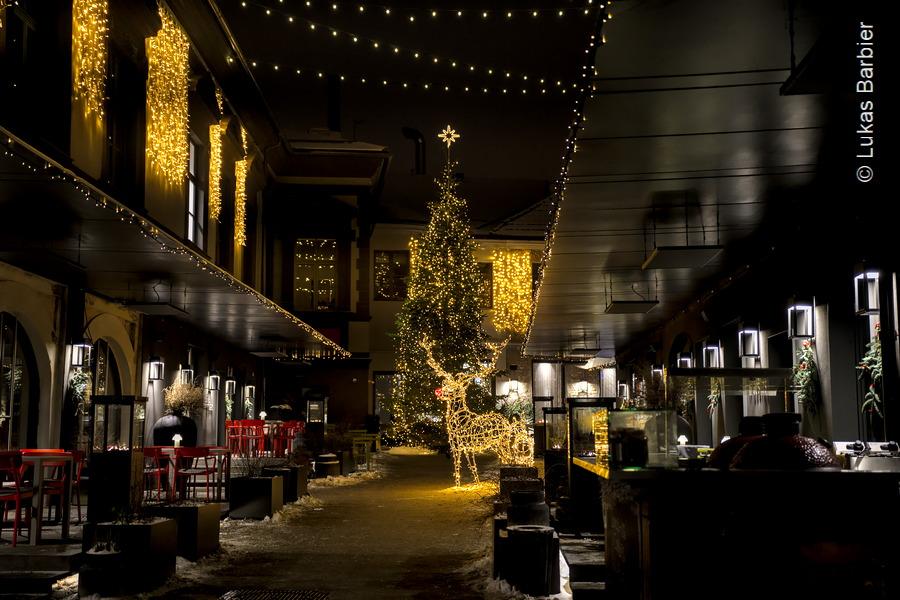 The ‘Senatorių Pasažas’ (Senator’s passage), an inside yard connecting Dominikonų street and Stiklių street, is covered in fairy lights, there you can find the restaurants Nineteen18 and 14Horses. Also, a luminous mesh reindeer resides next to a rather tall fir tree.

A Modernised story told on the Cathedral: A Christmas Carol 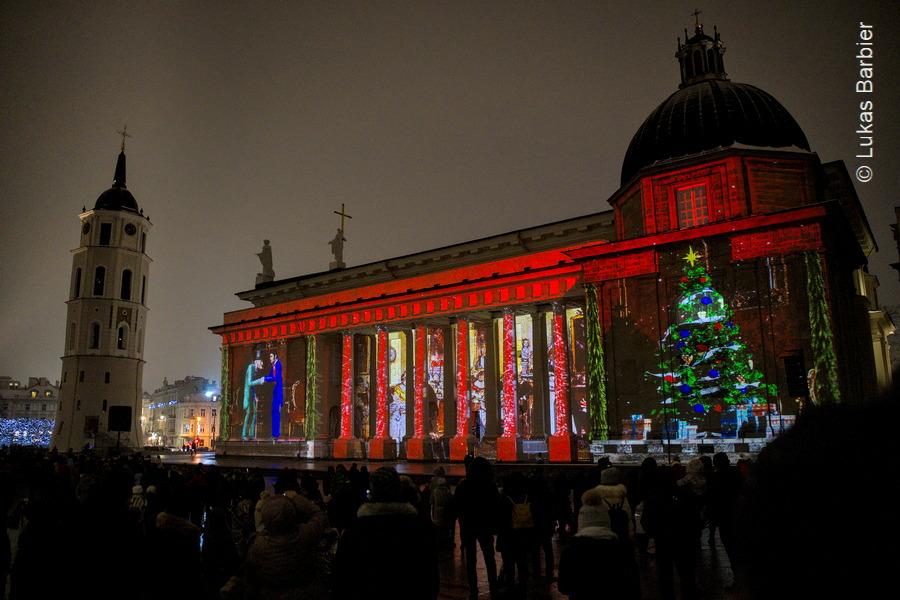 During the last week of December, a 3D animated version of Charles Dickens’ 1843 novel ‘A Christmas Carol’ is projected on the side of Vilnius Cathedral, an emblematic site in Vilnius with its tower. It is also narrated in Lithuanian throughout the 15-minute-long projection.

“Each year, we try to make Christmas not only traditional, but also modern. The impressive festive and musical tale is a gift to our young residents. We hope that the story projected on the facade of the Cathedral will bring a lot of warmth and happiness to Vilnius,” the vice-mayor Edita Tamošiūnaitė told the Vilnius Center of Culture.

Vilnius to tear down illegal structures in Roma settlement

Authorities are to tear down illegally erected structures in Vilnius Roma settlement alongside measures to integrate members of the Roma community, Vilnius Deputy Mayor Gintautas Paluckas has said, adding that the demolition will start as soon as a family occupying the building moves out. […]

The City Council of Vilnius approved a Roma integration plan which envisages breaking up the Roma settlement on the outskirts of the Lithuanian capital and resettling its residents in other parts of the town. […]

Property prices in Vilnius still over 30% below pre-crisis peak

Property prices in Vilnius are still 38.7% below their pre-crisis peak before a housing bubble burst with the financial crisis, only Tallinn of the Baltic capitals has seen its prices recover to near pre-crisis levels. […]

Poem to cheer you up

Call from the air: Vilnius invites visitors with a flight of hot air balloons

Musical celebration of 30 anniversary of the Baltic Way in Paris

Vilnius makes a bit to host Ronaldo and Messi dinner

The wave of interest to Vilnius after Chernobyl series is growing

Vilnius Festival of Music – Something from every musical taste

Kaziuko mugė: 416 years of history alive in the streets of Vilnius

Traditional Lithuanian kūčiukai recipes – tricks that will not allow you to make a mistake ...

Lithuanians maintain the tradition of ‘Kūčiukai’

Googling – the most dangerous way of self-treatment

Habits of Lithuanian holiday-makers: increasing numbers of single travellers but parents the leas...

Instead of a white smile – colorful teeth. On unprofessional teeth bleaching

The intrigue of The Walking Dead season 9: who will be the new leader?

Lithuanian nutrition expert: if you want to lose weight, you still can eat bread

Customers are satisfying their hunger for English books

National security enhancement – and the labyrinths: what politicians agree on and what lights the spark

The working groups have finalised the parties’ agreement on strengthening national security. Still, in the event of a divergence of views, the two important benchmarks will be dropped and replaced by more abstract formulations of […]