Two impeachment processes are beginning in Seimas. Member of Seimas Mindaugas Bastys is suspected of having represented the interests of the Russian Federation and thus breached his oath, meanwhile Kęstutis Pūkas has been accused of sexual harassment and may have committed a crime. If the suspicions prove true, the two members of Seimas may lose their mandates.
A discussion on this was held at the LRT television talk show Dėmesio Centre featuring Social Democrat Algirdas Sysas, Conservative Gabrielius Landsbergis, Liberal Eugenijus Gentvilas and Farmer and Greens Union Seimas group member Povilas Urbšys LRT.lt reported. 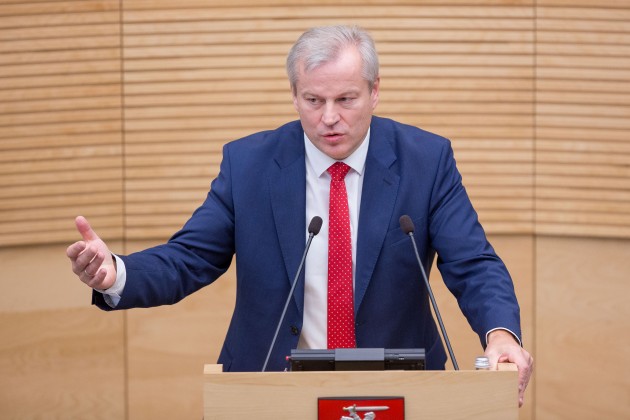 During the discussion A. Sysas pointed out that the matter needs to be concluded as soon as possible, without letting it be bogged down in various commissions, which he noted are time consuming and ineffective. He stressed that the Social Democrat Seimas group stands by the notion that responsibility for one’s actions must be taken.

While both the Social Democrat representative Sysas and “Farmer” representative Urbšys called for a rapid resolution of the situation and decisive steps, Conservative G. Landsbergis explained that he sees this as a masterful party of chess being played by the Social Democrats. He points out that the Constitutional Court has declared that if it is appealed to on the basis of a breached oath, then all the arguments would only be valid from the day the member of Seimas took the oath, October 14, 2016 in this case and if incriminating information is not found for after the date, the impeachment would fail.

As such the Conservative chairman explains that his party has called for a special commission to be formed, akin to that during the impeachment of Rolandas Paksas, which performed a more holistic inquiry compared to a regular impeachment commission. Landsbergis concludes that the regular impeachment process can be easily derailed in this case, which is why the Social Democrats are gladly cooperating, so that it would be possible to protect M. Bastys.

Meanwhile E. Gentvilas points out a further issue, why the majority is unwilling to create an inquiry commission – namely that it could expand the scope of its inquiry beyond M. Bastys, which could lead to further issues being uncovered. As an example, Gentvilas points out that the special commission could follow up on further leads, giving an example of it requesting more data on Ramūnas Karbauskis. He concurs with Landsbergis that the majority is attempting to avoid the formation of such a review.

When queried on whether the Social Democrats are rushing the process to avoid escalating the situation, A. Sysas deflected, repeating that serious accusations have been levied at their fellow party member and everyone wants answers, but members of Seimas should also continue to do the work they are there for.

Returning to the Constitutional Courts statement that a member of Seimas may be removed from his position for breach of oath only if the breach was made after the oath was taken, P. Urbšys points out that the matter will be reviewed with the fact in mind that many of the issues at hand are from before the oath was taken and when all the data is gathered, the Seimas will decide whether to present the case before the Constitutional Court or whether to initiate a further inquiry. Meanwhile A. Sysas adds that the Seimas National Security and Defence Committee could simply contact the head of the VSD to present the full classified report, which is why a further commission is unnecessary. 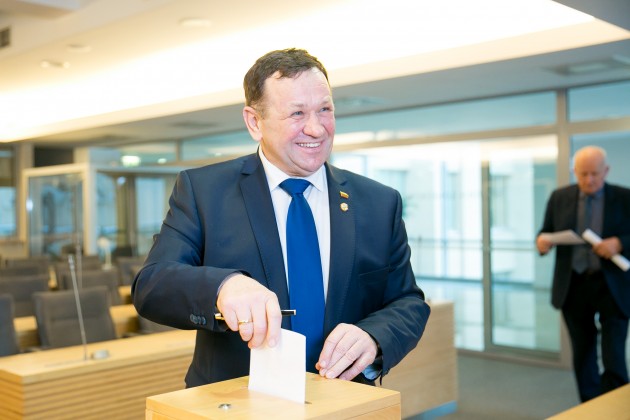 Regarding the case of Kęstutis Pūkas, whose sexual harassment has been testified to by a number of women, A. Sysas stated that if there will be sufficiently many reports, the prosecutors will be able to call on Seimas to cancel Pūkas‘ mandate as member of Seimas. To this E. Gentvilas retorts that only one report was enough, furthermore that the prosecutors already have recorded conversations that are condemning. He calls the chief prosecutor’s office refusal to begin an investigation disgusting given the overwhelming proof. P. Urbšys also notes that there are a total of three justifications for an impeachment of K. Pūkas – a harsh breach of the Constitution, breach of oath and suspicions of criminal activity. Urbšys states that the Seimas Commission of Ethics and Procedure will be gathering to discuss the matter and has the authority to initiate impeachment processes, if it deems it necessary.

The Lithuanian Constitutional Court is to issue on Tuesday its opinion on whether MP Kęstutis Pūkas breached oath and violated the Constitution when he allegedly sexually harassed his female assistant and young women who sought the job. […]

Order and Justice party to unite with about 30 public organisations

During a congress later in March, Lithuania’s Order and Justice party, part of the current ruling coalition, will sign an agreement to unite with various political parties, public committees, non-governmental and public organizations. […]

The Lithuanian State security Department (VSD) has provided a vast amount of “really serious” information on MP Mindaugas Bastys‘ ties with Russian citizens and controversial business people, the head of the parliament’s Committee on National Security and Defence said on Friday. […]

The Congressional Hispanic Leadership Institute (CHLI) hosted its virtual 17th Annual Gala & Leadership Awards: Cultivating Diversity of Thought on Wednesday, May 12, where Mr Žygimantas Pavilionis, Chair of the Committee on Foreign Affairs of the […]

Laurinkus: as relations fluctuate, Lithuania and the West should take an interest in Russian nationalism

I will admit, at first, I thought that Lithuania’s decision to expel two Russian diplomats in solidarity with the Czech Republic was hasty, without waiting for Sunday‘s televised public statement of Czech President M. Zeman. […]

Tension between Russia and the West: Moscow’s dangerous demonstrations of force and preposterous urging

The exchange of diplomatic slaps between Russia and the West has reached unprecedented levels since the Skripal poisoning in the UK in 2018. Russian diplomats were sent from Austria, Netherlands, Norway, Sweden, the US, Czechia, […]

On the “Farmers’” manoeuvres – it’s not Karbauskis’ whims, but part of a larger strategy

The Lithuanian defence industry is quite small and produces mostly tier 2 and tier 3 type products. Most of the production goes for export, which comprises around one percent of all the state export. Two […]

Urbonaitė : I don‘t see anyone willing to burn their political careers

Prime Minister Ingrida Šimonytė’s statement that upon feeling that the Conservatives Seimas group no longer backs her, she would question her continued leadership of the cabinet has stirred significant emotions and debate. The statement was […]