Due to continued improvement in the labour market and growing real wages, annual growth of household consumption accelerated to 5.4% in the second quarter of this year. Meanwhile, the increased uncertainty related to the geopolitical instability in the region, the fear of sanctions and slower than expected growth of the main trading partners, has most likely started to feed into the investment decisions by companies and households – the annual growth of investments decelerated to 8.1%. Growth of investments into capacity expansion and technological development lost momentum – acquisitions of machinery, equipment and transport increased marginally, just by 2.1%, in annual terms. Investment growth decelerated predominantly in those sectors that could be harmed by the Russian sanctions the most, such as manufacturing, retail trade, and transport and storage. Meanwhile, household and company investment in residential buildings still remained one of the most important drivers of investment growth. 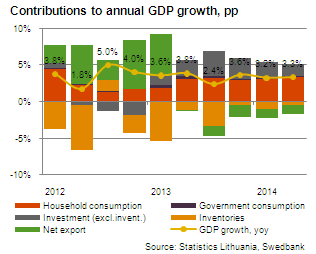 Export growth turned again positive in the second quarter of this year – exports of goods and services were 3.2% higher than a year ago. Export growth was very broad based, but was further dragged down by declining exports of refined petroleum products. Imports of goods and services increased at a faster pace than exports, which resulted in the negative contribution of net exports to GDP growth.

Value added increased in all economic sectors. Due to continued recovery in the housing market, constructions remained the fastest growing sector – in the second quarter of this year value added increased by 14.3%, in annual terms. Value added grew at a rather rapid pace in manufacturing (4.3%), agriculture (4.1%), trade, transportation and storage, and accommodation and food service activities (3.6%). 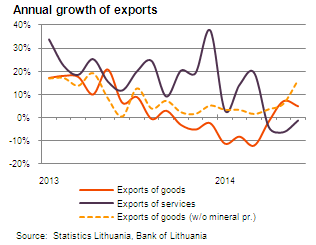 Due to the increased uncertainty in the region, the economic confidence indicator declined by 3 percentage points in July and remained unchanged in August. Surprisingly, despite the food product ban introduced by Russia in August, the confidence in industry, retail and services sectors have improved since July. Meanwhile, the consumer confidence indicator has declined to the lowest level since 2012. However, this decline is predominantly caused by external factors and we do not expect the households to cut their spending and increase their savings rate dramatically, since we expect the situation in the labour market to continue improving.

We expect GDP to expand by 3% this year and to accelerate to 3.5% next year and to 3.8% in 2016. The improving situation in the labour market, feeble inflation, and accelerating growth of the loan portfolio will support household consumption, but further acceleration of growth is unlikely. Investments are likely to grow somewhat slower due to worsening business confidence, although the new wave of EU structural funds and improving credit conditions will support growth. The export numbers will be negatively affected by the trade bans to Russia, weaker growth of the Russian and euro zone economies, and continued problems with the Lithuanian oil refinery.

Alcohol-caused mortality in Lithuania is on a steady decline, the country’s statistics office said on Tuesday. […]