In fact, claims about “peak oil” have been popular since the 19th century. Even in the 1970s many serious people were convinced (and some of them still are) that we were running out of oil. Like in most cases regarding the future of humanity, the pessimists were wrong.

The shale gas (and oil) revolution is a perfect example of how human ingenuity and freedom to act can solve any problem. Hydraulic fracturing has been around since 1950. However, only recently a couple of key technologies came together, i.e., horizontal drilling (drill two kilometers down and then two to the right) and development of proppants (i.e., sand and similar particles that keep fractures open and allow for gas to be collected) made shale gas a massive success. This allowed the US to become the new energy superpower.

This revolution is happening so fast that many still do not grasp it. Five years ago, many in the US planned to build new LNG import terminals. Now, however, there around 30 applications to build export terminals (even though experts think 4 or 5 will be built). The USA already outproduces everyone else in oil. Natural gas is already three times cheaper than in Europe and four times cheaper than in Asia. Energy-intensive industries, chemical industry is relocating back to the US. If 5-6 years ago there were no new plans for chemical plants, now there are around 150 planned.

The USA as a new and reliable supplier of gas can upset Russia’s strategic place in the world. Shale gas from the USA can reduce prices in Europe even if not a single cubic foot is delivered. The drop in prices might occur through potential competition and the drop in world prices. To put it simply, even the fact that now there is an alternative supplier may drive prices down.

Of course it’s not all that simple. Gas from the USA might flow not to Europe, but to Asia, or to any highest bidder. Even the thought that someone has an obligation to supply us with cheap gas is faulty. Americans are friends but they will sell their gas for market prices because real friends are like that. Other “friends” might be selling oil and gas at subsidized rates, but usually they want more than just friendship. 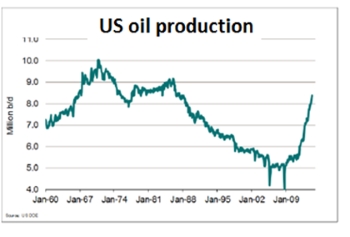 Shale gas revolution has a couple of lessons to teach. First, while Europeans are preoccupied with Gasland , YouTube clips about burning tap water, and protests on the other side of the Atlantic, real problems are being solved. What future awaits Europe if even the most rational and pragmatic country – Germany – de facto decides to get rid of nearly all sources of energy – coal, nuclear and gas? What will supply energy and feedstock for industry? Photovoltaics?

Second, Lithuania could also have participated in this revolution, not just watch it from the sidelines. Chevron was coming in with real investment and real advance payments to the budget. The fact that a couple of otherwise undistinguished members of parliament carrying “scientific” flyers that simply said “Shale gas = death” managed to sow doubt in the government is sad and infuriating. In that period the government performed not unlike the government of Zambia, which refused to accept food aid during the draughts and famine of 2002; the government allowed to be convinced by western green NGOs that the food-aid contained GMOs. Actually, green NGOs manage to exploit fears and grievances rather well. Even in Lithuania, besides the anti-shale hysteria, there was a lot of the anti-American rhetoric as well.

The world is experiencing a real revolution. A revolution driven by real sources of energy and affordable prices. Shale wells are being drilled with profits, not subsidies. It is commendable that Lithuanian government finally came to its senses and is inviting investors to exploit shale gas in Lithuania. However, we are paying for the past mistakes. And these payments are in USD, not Zambian dollars.

Žilvinas Šilėnas is president of the Lithuanian Free Market Institute

Lithuania to earmark additional EUR 3.1m for litigation with Gazprom

The Government of Lithuania is setting up a special commission for migration issues as the country prepares to take in over 1,000 refugees, the prime minister’s spokeswoman said on Wednesday. […]

There’s probably nothing fundamental that can be done to magically halt Lithuania’s slide into black pandemic autumn and winter. The country will just have to survive and hope that some new, even more, the threatening […]

Over the last eleven years, the value of startups in Central and Eastern Europe has increased 19 times and now stands at 186 billion euros. The value will likely increase even further by the end […]

What actually lies beneath the menacing flag of protest: a look at the real faces of the Movement of Families

What links the active participants of “marcher” protests: a businessman from Marijampolė, the son of the signatory of the March 11 Act, large families, pro-Russian figures and members of the criminal underworld? Lietuvos Rytas tried […]

The Constitution’s directives that there is no state religion in Lithuania and that no one can be privileged in the state for their religious beliefs have always been at risk. This risk has lately increased, […]

In Lithuania, in 2016 a decision was made to purchase infantry fighting vehicles Boxer. They were not purchased using the offset method, which allows part of the costs to be recovered in the state budget […]

Sees a need to replace ministers, but Šimonytė might fear a chain reaction

The new political season launched with a struggling ministerial cabinet and an opposition weakened by the “Farmer” divorce lrytas.lt portal writes. Social Democrat Seimas group elderly Algirdas Sysas is convinced that the sort of cabinet […]