The decline in unemployment was still supported by employment growth, however, annual employment growth decelerated from 2.2% in the first quarter to 0.9% in the second. Compared to the same period last year, employment increased most in the agriculture (11.4%) and the service sectors (0.9%), while it decreased in construction (-2.8%) and industry (-2.3%).

Unemployment decreased despite rising activity rate (for 15-64 year-olds), which increased from 73.5% in the first quarter to 73.6% in the second quarter. The declining share of young people (15-24 year-old), who are mostly economically inactive, in total population has been pushing up the activity rate since 2007. Another reason is that previously inactive people are entering the labour force due to reduced social benefits for those that are not actively looking for a job. 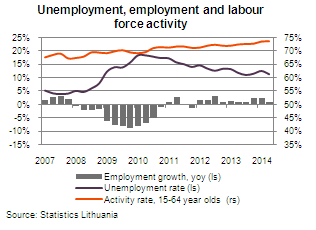 Despite the geopolitical tensions, we expect the situation in the labour market to continue improving in the coming quarters. Unemployment will continue to decline on the back of growing employment and shrinking labour force. In the second half of this year and next year annual employment growth, however, is likely to be weaker due to the embargo imposed by Russia and likely layoffs in the transport and food manufacturing sectors. Current sanctions will not have a significant dent to the employment growth, but further trade restrictions and more significant negative effect on the labour market cannot be ruled out. 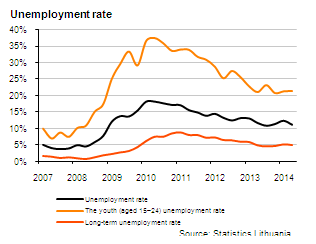 Unemployment in Lithuania edges down over quarter

Statistics Lithuania reports that, according to the Labour Force Survey data, in the second quarter of 2015, the unemployment rate stood at 9.4 percent. […]

Although the volume of exports of Lithuania’s goods and services to Russia shrank significantly due to Moscow’s embargo, which was imposed on a year ago, it has had only a minimal impact on Lithuania’s economy, says Vaiva Šečkutė, senior economist at Swedbank Lithuania. […]

In January the prices of consumer goods and services declined by 1.5% in annual terms and by 1.3% in monthly terms. This was the biggest annual deflation since 2003. Average annual inflation was at 0%. […]