Wage growth diverged in private and public sectors – private companies increased gross wages by 4.9% compared with the same year ago, whereas public sector employees enjoyed only 4.2% growth. Annual wage growth was most rapid in certain branches of the service sector, such as information and communication (7.8%), public administration and defence (7.1%), construction (6.9%), accommodation and food services (6.7%). 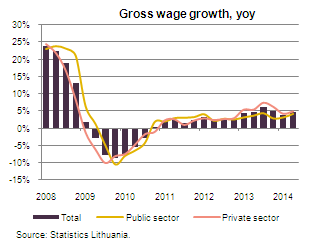 Despite the geopolitical tensions, we expect the situation in the labour market to continue improving in the coming quarters. Unemployment will continue to decline on the back of growing employment and shrinking labour force. In the second half of this year and next year annual employment growth, however, is likely to be weaker due to the embargo imposed by Russia and likely layoffs in the transport and food manufacturing sectors. But current sanctions are unlikely to have a significant effect on the labour market and wage growth. Due to an ever-more-visible lack of skilled labour it will become harder and harder to fill vacancies, thus wages will continue to grow rapidly. Inflation will remain low this year, which will lead to real wages growing somewhat faster than previously expected. 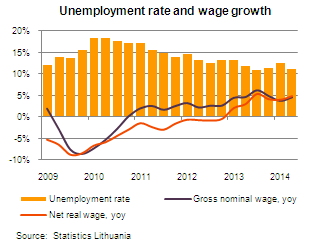 The decision by Maxima LT, Lithuania’s largest retailer that has been slapped with a 16.9-million-euro fine for anti-trust violations, to lower prices for over 1,000 products may have a positive effect on the economy, if it leads to increased competition among retail chains, Nerijus Mačiulis, the chief economist at Swedbank, said on Tuesday. […]

Business confidence in Lithuania is improving but slowly

Lithuanian business sentiment improved in March as the confidence indicator rose to -1 from -5 in February, according to the Lithuanian Statistics Department‘s business trends and expectations survey data for March. […]