Although we forecasted modest recovery of the growth in the second quarter, this one was above our expectations. At the same time, it should be taken into account that this figure is not precisely comparable with the 1Q growth rate (-1.4% y-o-y), as it is based on revised time series (excluding ESA 2010, which will be done in the beginning of September this year).

Despite the acceleration of the decrease in export of manufacturing goods, the largest contribution to the GDP growth came from the manufacturing sector value added. The decrease of export of goods accelerated to -3.5% in annual comparison, while import decreased by 0.5%. At the same time, first two months in the 2Q showed considerable improvement of the growth of export of services, above the growth of import of services, which softened the negative effect of the worsened foreign trade balance on the GDP growth.

After five consecutive quarters of decrease, net taxes on products turned to the growth contributed by the improved receipts of VAT and excise taxes, as well as, decline in product subsidies. All EU member states (not to mention all countries in the world) do not deflate this transaction identically, therefore both net taxes on products, as well as the GDP, is precisely comparable between countries.

According to our estimates, retail trade and private consumption had considerable contribution to the GDP growth, based on robust growth of real wages and improved consumer confidence. Growth of investments is limited by the persistent decrease in public sector investments. Households’ investments have moderate growth based on the investments in dwellings. Due to the weak demand and low confidence among our corporations, corporate sector investments stay quite modest in this year, being quite volatile by quarters and not sufficiently broad-based.

Robust recovery of the economic growth in Estonia depends substantially on the improving demand of our trade partners and how flexibly, compared to global large corporations, can adjust our enterprises with the weakened demand and/or enter new markets. However, export growth will remain on the negative territory in this year, which inhibits more robust recovery of the GDP growth in Estonia. 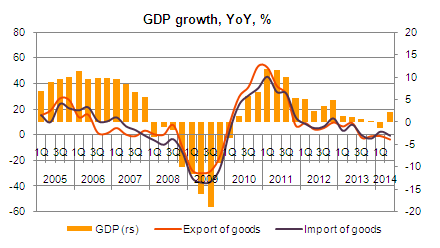 Lithuania got angry with China by allowing the Taiwan office to open but is looking for new markets in Asia. Recently, Foreign Minister Gabriel Landsbergis travelled to Singapore and Australia. This year, he plans to […]

The Rail Baltica project became suspended for years in Poland, when it emerged that the environmental impact study of the border section between the Polish town Bialystok and the Lithuanian border is outdated, and a new survey has to be conducted; it does not affect the project’s development in the Baltic countries, Postimees Online reports. […]