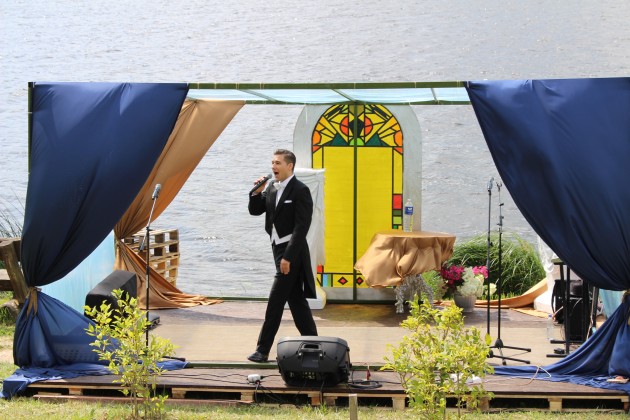 Water area invited to visit the “Konrad’s teahouse”, participate in the “Just like 100 years ago” photo-shoot, an education programme “Become the captain of the centenary ships”, learn the subtleties of the arts of binding and butter churning, spend jovial time fishing for prises in the aquarium, and taste some of the fish soup made by the volunteers from the Kupiškis youth centre. The décor of the stage, the teahouse and the entire zone was created by Justina Skrupskytė from the Kupiškis youth centre.

Earth – “the forest brothers’ area”
The activities in the zone presented a very sensitive period to Lithuania after the Second World War, and reflected on the history, narrative, songs and lifestyle of the resistance fighters. The scene for the area was made from materials collected from nature and created by the Kupiškis culture centre’s artist Ingrida Rudzinskienė. The scene hosted poetry and popular music, performed by locals Viktoras Bražas ir Matas Sankauskas, bards Juozas Mulaučius ir Vygantas Kazlauskas, multitalented composer and performer Raminta Naujanytė – Bjelle. 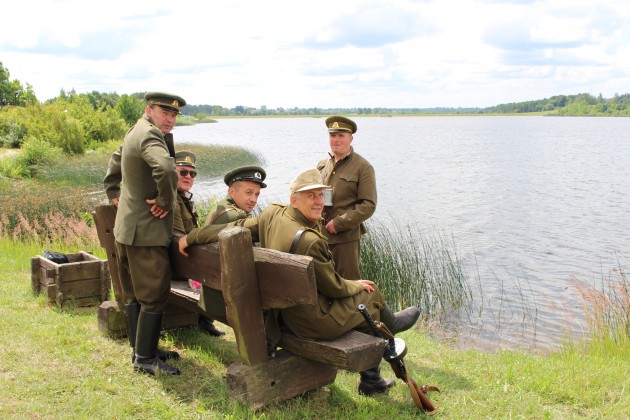 This area was rich in creative activities, educational and historical programmes as well as power games. “Partizanų antspaudai” (the signs for the forest brothers) educational programme, which was led by Kupiškis; ethnographical museum representative Miglė Zakarauskaitė, received a lot of attention in particular. Tent villages and activities taking place in them were co-organized with a group of likeminded people from Ukmergė club “Brothers of the forest”. LK KASP Vytis district 5th unit, Kupiškis 504 infantry company’s soldiers invited to take part in formation practice, and introduced people to their armaments, ammunition, and machinery. Viewers were also tempted by the authentic guerrilla dishes – military porridge, potatoes cooked on open fire, fatback, and homemade bread.

Air – “Seaside Grannies area”
This year the volunteers in the air area invited everyone to a Soviet era resort, a popular destination to which many rushed to relax, where parents took their children to the pier to watch the sunset and listen to music of bygone music stars. Participant of the „Stichijos” event had the opportunity to listen to legendary primadonna, including Nijolė Tallat Kelpšaitė and Irena Ulvydaitė Snabaitienė, as well as the popular band „Maddam”. This scene was also a home to the debut of the Kupiškis’ culture centre female ensemble, led by Vaiva Mališauskienė. The area was craftily decorated by florist from the Salamiestis city Jolanta Kovičienė. The viewer were transported directly to the Palanga pier, a traditional street market taking place next to it with workshops of all kinds working tirelessly, an art exhibition, a wool felting class, an exhibition of childhood photos brought by the visitors themselves called „Ember holiday”. There were even two photo studios available – a childhood sentiment memorialising “the Ship of Palanga” and a contemporary studio that used air blowers, „I am wild about “Stichijos”. 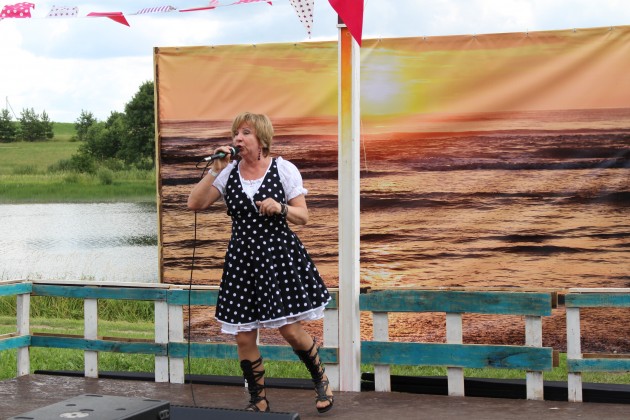 Fire – “Freedom and progress area”
The fire element represented the contemporary Lithuania – almost 30 years after it has been liberated, marked by a tricolour flag colours, sense of unity, and the symbols of free speech and freedom of creativity. The fiery programme started accompanied by the sound of motorbikes and American cars, which was organised with the help of Gintaras Songaila and Paulius Pranckūnas. In earlier years “Rock Marches” were the first examples of freedom of speech, which is why it was mostly rock music that was ringing on the scene of the artist Marius Skrupskis, decorated in national attributes and 3D holograms. 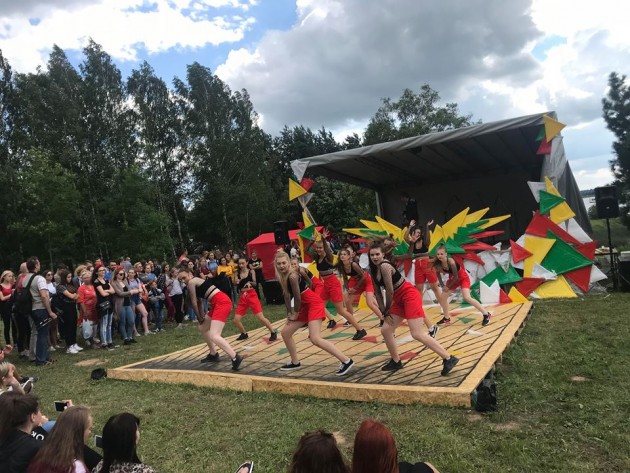 Bands that played live included a local young band „Rockstars On Budgete”, and bands “The Rocketshoes” ir „Rivercross” from Kaunas, which have Rytis Songaila, a local inhabitant and the creator of official “Stichijos” emblems, as the guitarist. Contemporary culture was represented by a highly regarded on YouTube rap group “8 Kambarys”, and a dance group from Kaunas “AK Dance” (trained by Kristina Burneikienė). They were joined by a karate presentation of Gintautas Čepukaitis’ trainees. Modern fashion was presented by the joint model team “2KAR2” from Kupiškis and Panevėžys cities (taught by Karolina Anskinaitė). The “modern circus” isle invited to learn the art of juggling, try out tightrope walking, building a night torch and exercising your mind while pedalling a “reverse bicycle”. Youngest participants could face their fears in the labyrinth “Light at the end of the tunnel: the end of the bogey man”, while strength enthusiasts competed in car pulling competition. Members of the fairer sex joined the abode of the henna painting master. Viewers were able to take photos near the symbolic “freedom wings”. 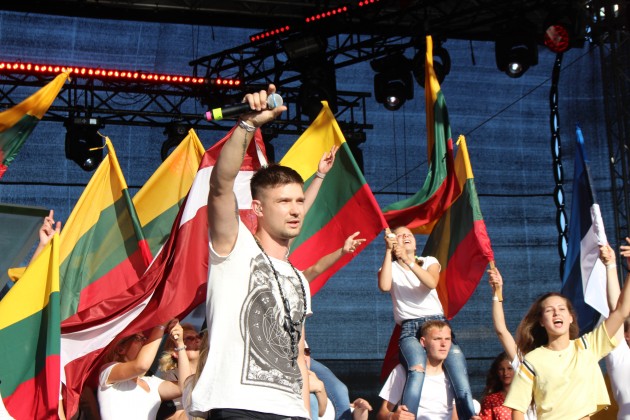 After the activities „Stichijos” festival were over, the skies of the lagoon housed the aero club acrobatic flight masters, while the main stage presented the teams from all four elements areas and their activities. The evening was crowned with a gala show from the 90s euro disco group “Joy”, Lithuanian rock group “Bix”, singer Donatas Montvydas and hiphop duo “Lilas and Innomine”. The concert was then led by a lively duo – Džilda ir Orestas Vaigauskai (actors Ineta Stasiulytė ir Aistis Mickevičius). Some time after the midnight, the island was lit up by the fire jugglers, and the sky – by fireworks. The celebration was closed by disco party led by DJ Dainiusha from Vilnius. 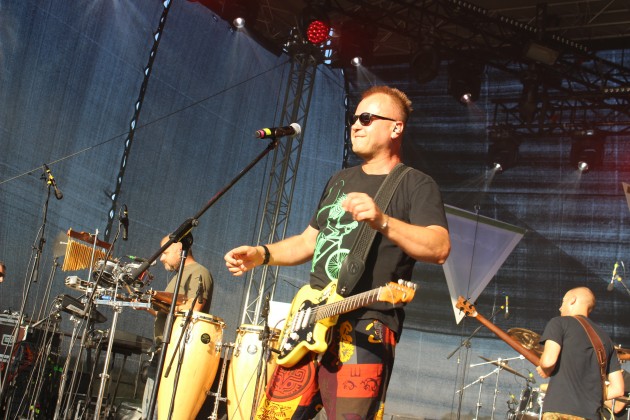 The organisers were happy not only with the excellent weather, but also with the fact that the organising team was joined by over 70 local volunteers. This year „Stichijos” received about six thousand visitors from all over Lithuania. 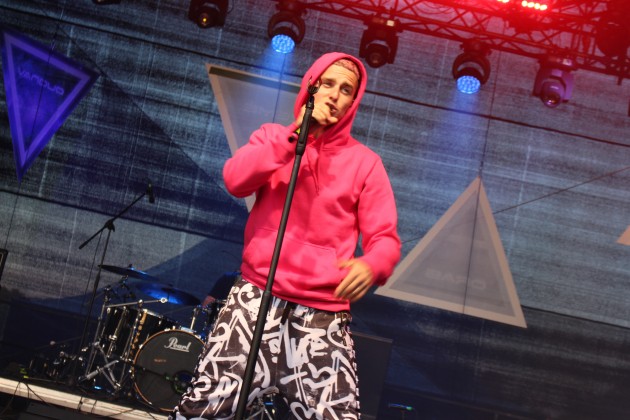 Magic awaiting in Vilnius, the capital of Christmas

Discover the modern face of Vilnius

Documentary on the Chodakowski sisters releases in October

Job – A Simple Man: a Danish-Jewish musical drama based on the novel by Joseph Roth in Vilnius

One of the most well-known places in Vilnius has shut down: have a look what’s new and how it loo...

The Dutch musical touch to a Lithuanian State Day

Hot curry on a hot night