A few years ago the organization began discussing the Lithuanian-American Lithuanian Hall of Fame project. On Saturday, four more new members were added, to the 11 added in previous years. The most prominent SALFASS athletes who ever entered the arena are in this group, which grew a litter larger this year with the addition of four additional inductees: Dr. Donatas Siliūnas from Chicago, Algis Rugienius, from Detroit and 2 Canadians – Mamertas Duliūnas and Jonas Nešukaitis.

There is a calendar for organization’s main sports events in 2018, ranging from mountain skiing, golf, softball, table tennis and outdoor tennis, to the most popular sport, basketball around the world, more detailed information will be published in the press, at ŠALFASS website, www.salfass.org, and Facebook and Twitter accounts. 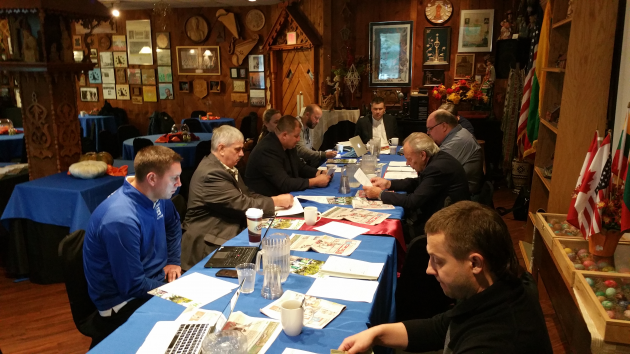 2017 is the official Year of Sport in Lithuania. In the US, the year of sport is also the year of elections – new members were added to the board of the SALFASS. The following board members were approved: Laurynas R. Misevičius, vice-chairman and Canadian constituency head Stasys Kuliavas, elected for the fourth time in office, secretary Arūnas Čygas, Eastern District The chairman is Deivis Pavasaris, the Middle-West – Aurimas Matulevičius, and treasurer Arūnas Morkūnas. as of few years ago, a resident of New York, Rasa Mitrulevičienė, who resides in New York as well, was elected as a treasurer of the SALFASS Foundation, replacing Gintautas Garsis in the post and becoming the first new female representative of the Board of Directors of ŠALFASS Center in a decade. Žilvinas Bublis will be the representative of SALFASS in Europe, and Paul Riškus will be the head of the Basketball Section Committee.

On Saturday, October 29th, towards the end of the congress, delegation members were treated to an unexpected surprise, when Mindaugas Kuzminskas, came to the Lithuanian Club for a visit, in town to play a NBA Regular Season Match with his team the New York’s Knicks. The Lithuanian national striker has long been in contact with the members of the SALFASS and the local Lithuanian Club. He was happy to be photographed with all of the fans, including the small ones. He enjoyed the Lithuanian cuisine, saying that for the first time in 2 years in America, he finally enjoyed a lot of his favorite dishes, including cepelinai. He stayed long enough to listen to local Lithuanian singer, Eugenijus Dicevičius (Augis) perform his medley of easy listening melodies for the guests .

Kuzminskas’ team- the NY Knicks, had no trouble with the Cleveland Cavaliers basketball players who played in last year’s NBA Championship, winning 114-95.

In Tomas Masaytis’ photos: the participants of the SALFASS Congress (with green shirts) and the Cleveland Lithuanian Club host and singer Augis (with black shirts) with Mindaugas Kuzminskas.

The main focus of this year’s SALFASS annual meeting, was discussing issues of greatest importance to underprivileged Lithuanians participating in sport.

Lithuanian basketball team couldn’t have started out any better. With a starting 5 of Mantas Kalnietis, Marius Grigonis, Edgaras Ulanovas and Lithuania’s NBA frontcourt duo of Jonas Valančiūnas (JV) and Domas Sabonis finally getting to […]

About 6 minutes into Lithuania’s first game versus Poland on June 28th, I was thinking to myself that Lithuania was in big trouble. They didn’t start out good at all. A scrappy Polish team was putting up an intense fight, jumping out to an early lead. They were knocking down everything from beyond the arc and team LT looked like they had not even practiced. They were very slow on defensive switches and close-outs, which led to these wide-open early three-pointers by Poland. Basically, it looked as though LT was just going through the motions and mailing it in, not caring about winning or putting forth much effort at all […]

On the celebration of the coronation of King Mindaugas on Wednesday, well-known Lithuanian basketballer Mindaugas Kuzminskas left for New York to sign a contract with the NBA‘s New York Knicks.

Q&A on sports and Lithuanian citizenship

Demographers urge to not celebrate positive emigration indicators too much: new threats emerge

Why is there going to be a future increase in Lithuanians returning from abroad?

What actually lies beneath the menacing flag of protest: a look at the real faces of the Movement of Families

What links the active participants of “marcher” protests: a businessman from Marijampolė, the son of the signatory of the March 11 Act, large families, pro-Russian figures and members of the criminal underworld? Lietuvos Rytas tried […]

The Constitution’s directives that there is no state religion in Lithuania and that no one can be privileged in the state for their religious beliefs have always been at risk. This risk has lately increased, […]

In Lithuania, in 2016 a decision was made to purchase infantry fighting vehicles Boxer. They were not purchased using the offset method, which allows part of the costs to be recovered in the state budget […]

Sees a need to replace ministers, but Šimonytė might fear a chain reaction

The new political season launched with a struggling ministerial cabinet and an opposition weakened by the “Farmer” divorce lrytas.lt portal writes. Social Democrat Seimas group elderly Algirdas Sysas is convinced that the sort of cabinet […]

Much uncertainty after Skvernelis and Karbauskis’ divorce: reason behind playing tricks explained

Was the love between Ramūnas Karbauskis and Saulius Skvernelis, which brought the “Farmers” success in the 2016 elections, blind or faked? In either case, the couple’s loud divorce is accompanied by a myriad of long-suppressed […]

Political scientists on Skvernelis’ move: what was expected and what future is predicted

The future and political success of the politicians who broke away from the Lithuanian Farmer and Greens Union (LVŽS) will depend on their ability to garner support and find their niche, political scientists say, Austėja […]