Who will pay the price?

Of those facing the ban, the EU has the closest trade ties with Russia. Russia was the destination for 2.6% of EU exports in 2013. This ranges from just 0.4% in Portugal, to a hefty 19.1% in Lithuania. Of those facing sanctions, the countries’ most dependent on agricultural exports (in terms of the proportion of their exports which are composed of food and live animals) are Denmark, Lithuania and Cyprus. 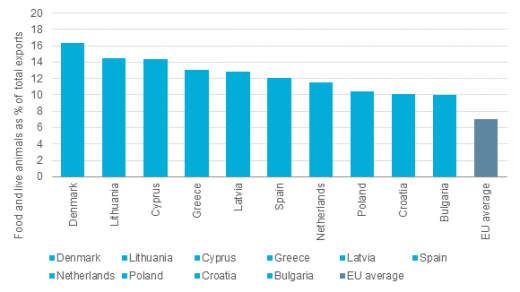 Note: Based on a ranking of those countries affected by the sanctions – the EU, Canada, Australia and the USA.

Lithuania, as an important agricultural exporter and a major trading partner of Russia, is the chief country in the firing line. Its major agricultural exports to Russia in 2013 were vegetables, fruit and nuts, and dairy products and eggs – many of which are included in the export ban. Food and drink exports from Lithuania to Russia totalled US$1.8 billion in 2013, equivalent to 28.2% of all exports to Russia in that year.

An added risk to the EU economy

The EU’s exports of food and agricultural products to Russia totalled US$15,463 million in 2013 or 9.7% of its total exports to Russia, which represents 0.1% of GDP. Therefore the direct impact on the EU economy taken as a whole will not be large. Yet the sanctions must be seen in the wider context of a weak Russian economy and the heightened risks that geopolitical instability in Ukraine and the worsening of relations with Russia bring to the EU at a time of already fragile growth.

An own-goal for Russia

The sanctions could also be something of an own-goal for Russia. Russia is a food importer with a trade deficit in food, live animals and beverages of US$23,878 million in 2013; and the ban on EU products could push up inflation, already high at 6.8% in 2013. Russia will have to ramp up domestic agricultural production and seek new suppliers of food products, which will necessarily be further afield, adding costs to imports. Again this must be seen in the wider context of a weak Russian economy facing low levels of investment, weak business confidence and significant capital outflows.

Consumer spending in Russia on food and non-alcoholic beverages is high – accounting for 30.5% of all consumer spending in the country in 2013. This rises to 41.0% for the very poor – decile 1 households. Spending on meat alone totalled US$92,280 million in 2013. Food price rises will therefore have a significant impact on the average Russian household, affecting the poor the most.

Proportion of Spending by Russian Households on Food and Non-Alcoholic Beverages by Income Decile: 2013 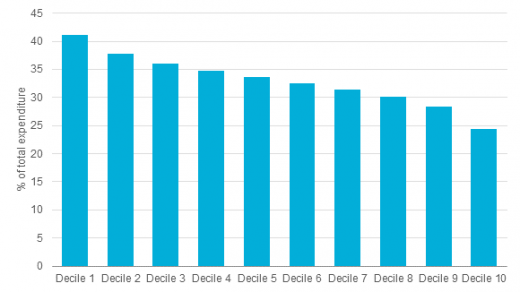 The Lithuanian State Defense Council will discuss the needs of the national defense system and the country’s participation in international operations in 2018 and 2019 at its meeting on Monday. […]

In the tradition of European historical memory of the 20th century, the mention of Munich reminds us of the 1938 agreements between Germany, France, and Britain on the future of Czechoslovakia. It is symbolic that […]

Lithuania’s President Dalia Grybauskaitė ranks 68th among the world’s 100 most powerful females published by the US magazine Forbes. […]

What Lithuanian politicians aren’t saying about the deployment of the German brigade: a call to stay in touch with reality

Early presidential elections took place in Kazakhstan on 20 November. The final results show that Kassym-Jomart Kemeluly Tokayev was elected for a second term as President with 81.31% of the vote. What does this election mean […]

Labels are important. For too long, the Western world preferred to ignore Russia’s crimes at home and abroad and look the other way. But no more. Last week, when the European Parliament labelled the Russian […]

Some 699 Real Estate (RE) properties – this is the number of properties acquired by Russian citizens in Lithuania until the 15th of November this year. This figure is only a few dozen less than […]