The Peasants and Greens Union decision to tackle the measures on alcohol control in Parliament, has attracted both a lot of criticism and support, as none was left indifferent on the question regarding alcohol control.

The fight against alcoholism has been one of the corner stones of the above mentioned political party’s election campaign promises to the public. Although, truthfully the election program initially promised more control measures, the most important of which regards the sale of alcohol only in state controlled stores. The Government has decided to postpone this measure.

Vladas Gaidys, the manager of “Vilmorus” to DELFI stated that the poll conducted during the timeframe from the 5th to the 13th of May which was not ordered to be conducted on the behalf of any client. Furthermore, several monthly surveys carried out on the popularity of political parties, as well as the popularity of political institutions among the population were also included in survey, conducted solely on the initiative of the “Vilmorus” company.

According to, the survey conducted while the citizens of Lithuania support the bad on the advertisement of alcohol and the limiting of sales during selected hours, as well as the ban regarding the sale of alcohol to anyone under the age of twenty.

Moreover, the question regarding the establishment of specialised shops for now appears to have been postponed by the Parliament. At the same time, the stance of the government regarding the sales of alcoholic beverages in festivals and events appears to have softened, as the non-final decisions regarding mass events show, that while during free public events and fairs will have a designated area where persons under the age of twenty would not be allowed and weak alcohol could be purchased. During public events that will charge an entrance fee the sales of all alcoholic beverages will be allowed.

Moreover, according to the sociology scientist V. Gaidys the support of the respondents in the conducted survey regarding the banning of alcohol commercials is not surprising, as the advertisement of the products itself is clearly not attractive to the general population. 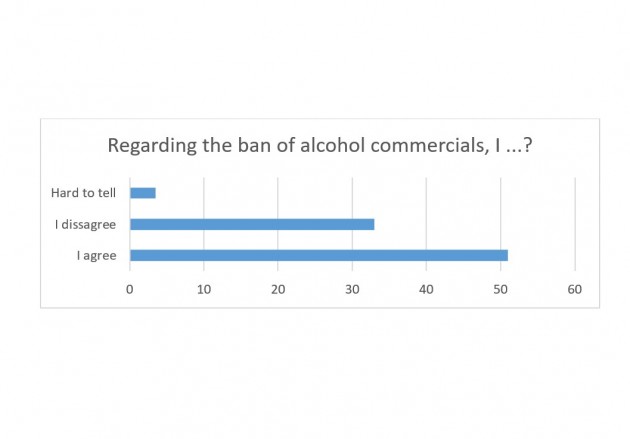 “Usually, it is not the people themselves that want the ads. They would have gotten the same situation, if they would have asked about the advertisement of donuts, this is not a new discovery” – V. Gaidys stated. 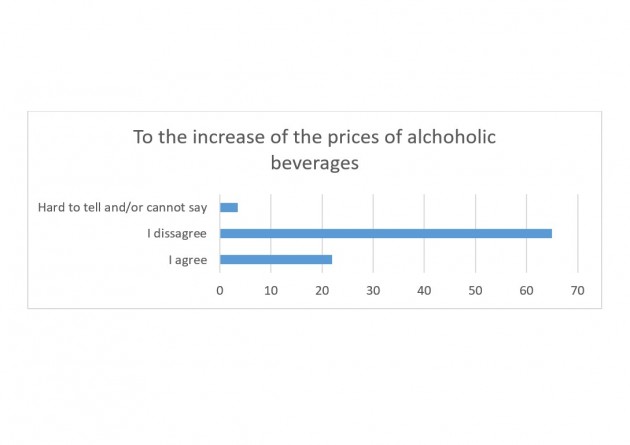 Although, 46 pct. of the respondents agree to the shortening of the timeframe during which alcoholic beverages can be purchased. The sociologist notes that this measure is often highly supported by women, respondents with higher education, while men on the other hand generally oppose such drastic measures. 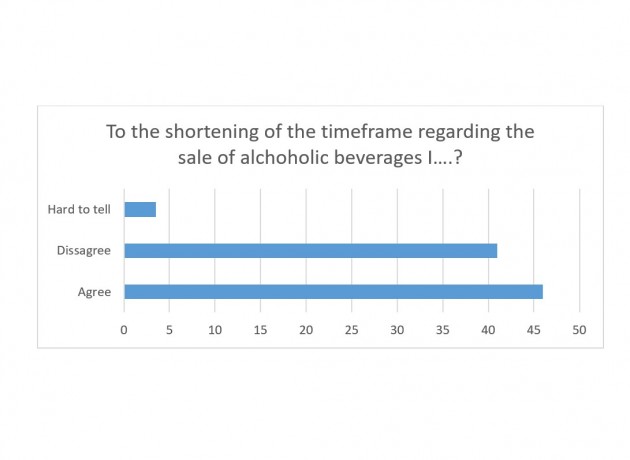 Moreover, men over fifty years of age generally agree to the shortening of the timeframe during which alcoholic beverages can be sold, when compared to the opinion of the younger population. 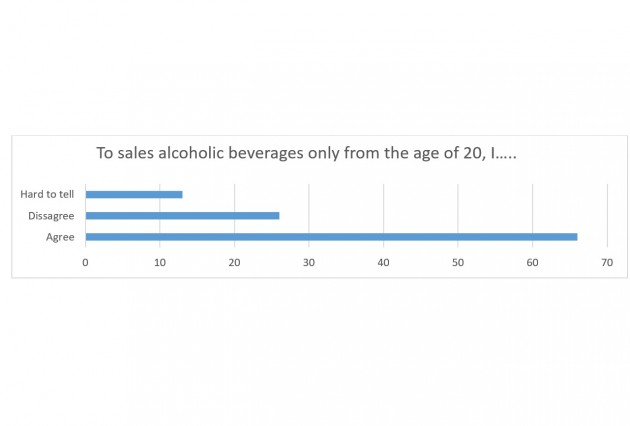 According, to the survey 66 pct. of respondents supported the increase of the age limit regarding the purchase and consumption of alcoholic beverages. Furthermore, the sociologist V. Gaidys notes that regarding the possible answer formulation on the question the word “only” should have been included.

“This measure s more or less supported by all groups, with the exception of people aged from 18 to 20. As all others who surpass this age, have voiced their agreement” – V. Gaidys further explained.

Furthermore, the sociologist argues that on the issue of the increasing the current legal drinking age, all political party voters agree, as even the members of the Liberal Movement do not necessarily oppose the increase of the legal drinking age to twenty years of age.

According to, the interlocutor there is a general trend seen in regards to restrictions regarding this matter being supported more by both women and older people. 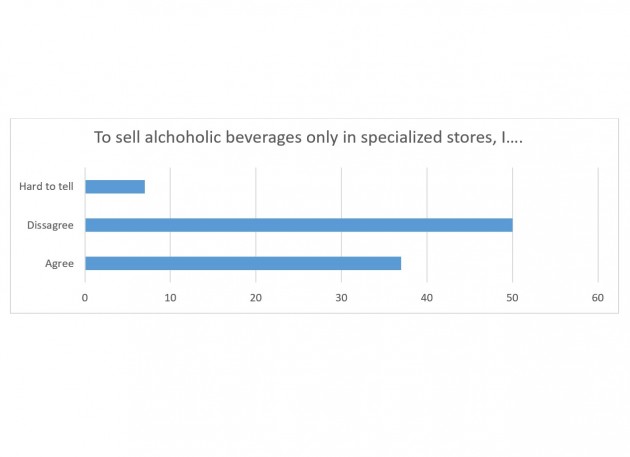 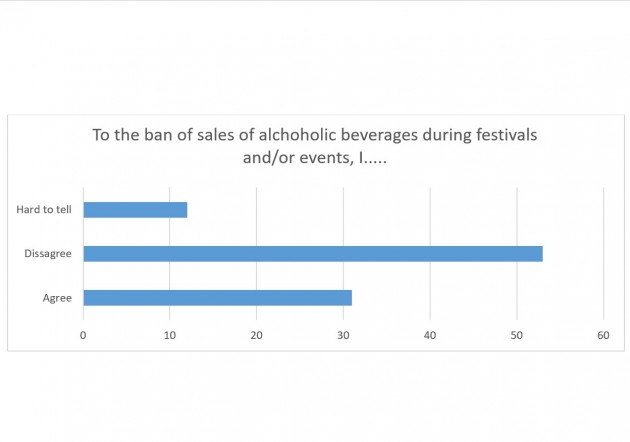 V. Gaidys, continues noting an old survey conducted in the September of 1989 by the Lithuanian Academy of Public Opinions Research centre. From which institution the current public opinion research agency “Vilmorus” emerged.

Furthermore, in the entire Soviet Union during the timeframe from 1985-1987 the anti-alcohol campaign of the Mikhail Gorbachev was in full swing. Thus, during a survey conducted in 1989 the people of Lithuania were asked on the matter regarding of the sales of alcoholic beverages.

“There were such alternatives as ‘I am for prohibition (alcoholic beverages should not be sold)’. There were about 15 pct. supporting the following. Another alternative was: ‘Its sales should be limited, not to sell more than was sold a couple of years ago.’ This was supported by 16 pct. The third alternative: ‘I am satisfied with the current situation’. Apparently, vouchers were also given to babies and some non-drinkers were stocked with vodka for the next twenty years to come during that time. The last alternative was as follows: ‘There should be enough shops selling alcohol, so there would always be a possibility to purchase it.’ Which was supported by 54 pct.” – noted V. Gaidys.

“It took a little while and we are once again going over the same question” – summarised the sociologist.

WHO: three measures that work the best

According to, Gauden Galea the direct of the Division of Non-communicable Diseases and Life-course of the World Health Organization (WHO), while Lithuania so far has ‘looked’ quite well among other countries in regards to its restrictions placed on the availability and restriction on the advertising of alcohol, on the matter of the prices of alcohol the state is still too lenient.

As, according to the WHO three measures work the best:

The limitation of the availability of alcohol;

The prohibition of the advertisement of alcoholic beverages;

On the authority of the WHO regarding the how states choose for reducing alcohol consumption. G. Galea further, noted that the limitation regarding the restriction of the availability of alcohol restrictions, Lithuania currently looks much better than other countries, as the media score of WHO countries currently is 64 points, while Lithuania received 86 points.

Since the restriction means a decrease of physical accessibility and the limitation of social acceptability, as it both involves the limitation of the timeframe in which alcohol sales can occur, as well as the implementation of stricter measures regarding the licencing and the reduction of the physical places the good can be sold.

Moreover, according to the restrictions placed on the restriction of advertisements featuring alcoholic beverages, Lithuania scored 69 points, while the media is 50 points.

At the same time, however while Lithuania scored 6 points regarding its policy regarding alcohol prices, the median of WHO countries is 20 points. Which, according to G. Galea is the most effective tool applied to low-income groups.

Which leads to the conclusion that Lithuania still has a vast among of more in regards to the increase of alcohol prices. However, experts note that Lithuania is a member of the European Union’s common space, such measures would increase and encourage the illegal and unaccounted for consumption of alcohol in the state.

The members are Parliament are supporting the following measures:

Alcoholic beverages will not be sold to anyone below the age of twenty.

Mass events and fairs themselves will be divided into the categories of paid and unpaid. During free events special areas should be established, in which there will be sales of weak alcoholic beverages sold until 7.5 pct. proof alcohol, as well as anyone under the age of 20 will be prevented from entering. While mass events that will require an entry fee will be allowed to have alcoholic beverages to be sold without being restricted into specialized zones.

Residents will not be allowed to carry ad/or store alcoholic beverages in package visible to the public eye, with the exception of places were the trade of alcohol takes place.

The timeframe during which alcohol can be sold will be limited. Thus, retailers will be able to sell alcoholic beverages from Monday to Saturday from 10:00 a.m. to 8:00 p.m. and on Sundays from 10:00 a.m. to 3:00 p.m., which also applies for cafes as well.

The Parliament has decided to bad any form of advertisement regarding alcoholic beverages. However, trademarks, information about the producer and etc. is not regarded as advertisement.

Although, after the vote the Parliament had retained the requirement that non-stationary outdoor cafes that engage in the sales of alcoholic beverages for which during the holiday season it is necessary to obtain a license to sell alcohol was required formally, will no longer be able to obtain the license necessary to sell alcohol. However, the ruling coalition in Parliament noted that the sales of alcoholic beverages will only be prohibited for cafes that only open up during the summer season near beaches and etc.

The survey was conducted by “Vilmorus” in 2017 during the timeframe from the 5th to the 13th of May. The company interviewed 1005 adults aged from 18 and older, in 21 towns and 22 villages in Lithuania.

People in Lithuania traditionally trust fire fighters, the police and the army, and don’t trust political parties, the Seimas and the government, according to the latest survey, carried out by the Vilmorus pollster for the Lietuvos Rytas daily, published on Saturday. […]

The Seimas elections are already this Sunday, but many observers have criticised that the current elections are as bleak as ever. Why are the upcoming elections so much less impactful than the previous ones? The […]

Journalist and author Algimantas Čekuolis, Roman Catholic priest Ričardas Doveika and historian Alfredas Bumblauskas top the list of Lithuania’s most influential public figures, according to an opinion poll published by the Delfi.lt news portal on Wednesday. […]

How are the Baltic Sea countries handling coronavirus

With COVID-19 shaking up markets, farmers are advised to sell part of their harvest at higher prices

Nausėda’s promise remembered after surprising decisions by the Presidential Palace

With President Gitanas Nausėda refusing to appoint former ministers, who held significant public trusts, to ambassador positions, experts note that the president has already promised some of the pledges that accompanied him into the elections […]