Minister of Foreign Affairs Linas Linkevičius spoke on the new government programme implementation plan‘s foreign policy priorities and explained that the main goals over the next four years will be national security and economic diplomacy. Opposition representatives are surprised that most of the planned major tasks are left to the end of term and have also pointed to a lack of contact between the country‘s foreign policy makers and countries of strategic importance, Lzinios.lt reported.

The plan, released several hours ago and with amendments pending, currently outlines 14 key tasks that are to be accomplished in foreign policy and national defence such as strengthening strategic relations with major NATO and EU countries, implementing the decisions made during last year’s NATO summit meeting in Warsaw, to secure Lithuanian strategic interests in EU decision making. Questions of the Belarussian Astravyets nuclear power plant’s security, Brexit and Eastern partnership are also among the priorities, as is the aim to strengthen relations with Scandinavian states and Poland. The plan specifies that most of the goals are to be concluded in the long run, up to the end of the current government’s term.

Among the priorities outlined in the implementation plan, Linkevičius highlighted the strengthening of national defence via cooperation and involvement of strategic partners and the implementation of NATO decisions made in various summit meetings. He notes that this will be a formative factor in relations with countries such as the USA or Germany.

The second bloc of important tasks is related to economy according to the minister. Linkevičius describes how the ministry has been expanding its capacities in this regard with the establishment of the Economic Diplomacy Service. He also notes that 2017 may be decisive in the country’s bid to enter the OECD.

The third priority the minister outlined was that of relations with neighbours and the priority Northern-Baltic region. He points out that the aim is to uphold pragmatic relations with Poland, including economic questions. In part this is to be achieved by raising the number of high level bilateral meetings. 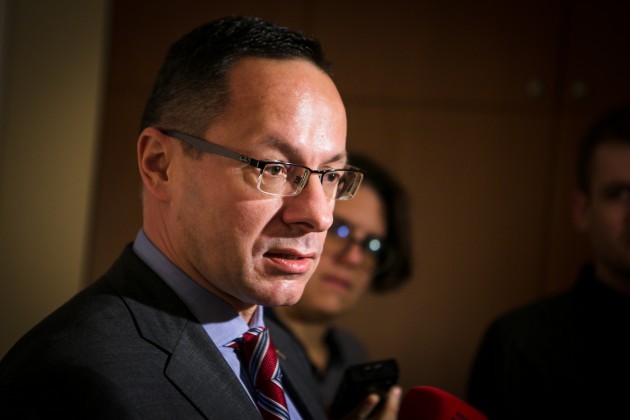 Seimas Committee of Foreign Affairs member Žygimantas Pavilionis of the Conservative party, who is also the former Lithuanian ambassador to the United States believes that dialogue with Scandinavian states is already rather successful, while pointing out that Lithuania has failed in its communications with Poland and other Central European states. He links the lack of adequate interaction with Poland as Lithuanian diplomacy pandering to Brussels due to the belief that the EU bureaucracy is not overly fond of Poland, alongside the UK and thus Lithuania avoids joint initiatives that are offered to it. Pavilionis stresses that no development of bilateral relations can succeed while diplomacy is only done in tune with Brussels.

One of the key goals mentioned is to develop relations with major EU and NATO countries such as the USA, Germany, France and the UK. The implementation plan includes intensified meeting schedules with US Congress advisors and more frequent visits from Lithuanian members of parliament across the Atlantic, alongside negotiations for increased financial and expert support to develop military capacities.

The Lithuanian-French strategic partnership action plan is to be renewed and a new Baltic State – UK cooperation format is in the plans, which are to also include regular meetings between the Prime Ministers of the states involved.

Based on the planned measures, the number of high level meetings with US, German, French and UK representatives should rise from 18 (in 2016) to 20 in 2020.

According to Ž. Pavilionis Lithuania currently has to put great emphasis on building relations with the USA and President Donald Trump. He calls to triple the resources dedicated to work with the USA and focusing on building dialogue with American legislators. However the politician laments that the government programme implementation plan appears to only be a bureaucratic description of current affairs, rather than strategic goals.

The implementation plan features claims to supporting Eastern partnership based on democratic values and national security interests. In this regard, already by the end of this year it is planned to conclude an Association agreement with Ukraine, as well as ratifying visa free regimes with Georgia and Ukraine. Regarding Russia, the plan outlines the aim of concluding border demarcation with Russia by the end of 2018 and organising a Russia forum in Vilnius in three years.

The question of the Astravyets nuclear power plant is a separate point and is described as a threat to national security, regarding which the government intends to build a joint position among the Baltic States to prevent electricity from the plant from reaching the European market, furthermore entering the issue into the list of EU foreign and energy policy priorities. This is to be done in 2020.
Ž. Pavilionis is not greatly impressed in this regard, noting that Lithuania is already belated in this regard, with Astravyets NPP planned to open in 2018-2019. The politician notes that all efforts must be made to resolve this question and points out that there has been much talk, but no consistent government work.

The member of the Committee of Foreign Affairs finds the plan to basically be an expression of intent to continue with “business as usual”, which has produced little in the way of results. He notes that the current powers in government have little interest in making strategic changes in current foreign policy.

Statistics show that Lithuania’s official emigration rate did not slow down in April and remained higher than in the same period last year. […]

The Lithuanian government does not expect Belarus to take retaliatory measures against Lithuania over the country trying to block the construction of a new Belarusian nuclear power plant at Astravyets, said Energy Minister Rokas Masiulis. […]

On Sunday afternoon, several thousand people turned up in Washington for a silent march organised by the French Embassy. The march was held on the same day as millions joined the leaders of dozens of countries in Paris. In Washington, the ambassadors from several countries together with dignitaries, religious leaders and thousands of concerned citizens joined the French Ambassador to the USA, Gérard Araud. The participants gathered in front of the Newseum in Washington, a museum dedicated to the press and freedom of expression. […]

After a missile explosion in Poland – no illusions about NATO’s response, but one small twist is possible

It is highly likely that the rocket that exploded in Poland near the Ukrainian border and killed two people was fired by the Ukrainian armed forces to shoot down one of the Russian missiles. The […]

The 60 days of Tehran

It is not impossible. It is by no means out of the question that November 2022 will go down in history as the month of freedom that would have seen Iran begin the fall of […]

Why is the social enterprise sector in Lithuania, which has a potential of billions of euros, stagnating?

There has been much talk recently about the European prospects of Ukraine and Moldova in the context of the European institutions’ decision to grant the status of candidate countries for EU accession. Undoubtedly, it is […]

HIMARS for Lithuania: military experts’ verdict on this news

Lithuania purchase of eight HIMARS missile artillery systems is one of the essential steps in the country’s history, which will raise the country’s army to an entirely new level, according to military experts interviewed by […]